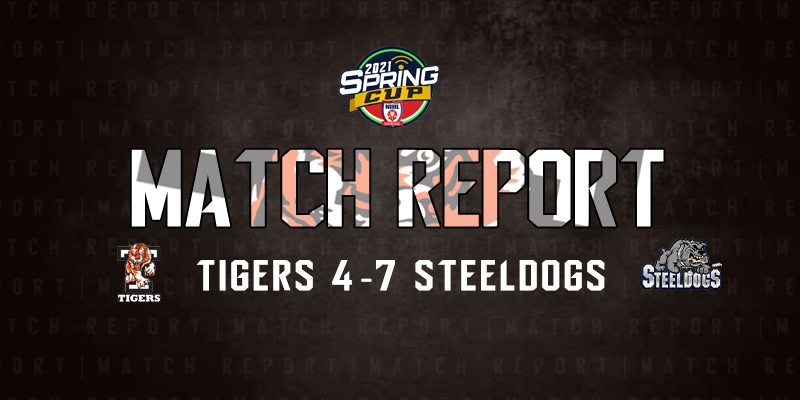 Kirk Hat Trick Seals Tigers’ Defeat. Hexagon Telford Tigers played their final home Spring Cup game at Telford Ice Rink on Wednesday evening where they faced off against the cup winners Sheffield Steeldogs. Whilst Tigers could no longer win the cup, they had already sealed the runners-up spot as Swindon, in third place, could only equal Tigers’ points tally and Telford had the better head-to-head record.

Tigers started well and had a power-play chance in the opening minute of the contest after Sheffield’s Davey Phillips was called for tripping. Robert Lachowicz went closest when Tigers had the man advantage but shot over the goal.

Sheffield opened the scoring with their first chance of note. Competition top scorer Liam Kirk was left unmarked on the Tigers’ blue line and a stretch pass from Nathan Salam picked out Kirk perfectly to allow him to skate in on Day’s goal unchallenged, fake a shot, and then beat Day low down to give the Steeldogs the lead.

Tigers went close on a couple of occasions, with Jason Silverthorn and Scott McKenzie creating chances but Tigers’ shooting was a little off and Lawday in the Sheffield goal looked comfortable.

A late penalty for Sheffield – Jonathan Kirk for delay of game, would see Tigers start the second period with a minute left of power-play action.

With the penalty killed off, Sheffield then had a power-play of their own in the opening minute of the period. Ben Lake created a glorious chance for himself, skating around the back of the goal, and with Day out of position, the Sheffield forward somehow missed the goal with a wrap-around shot and inadvertently gifted the puck to Tigers’ defender David Clements who sent a pass down ice to Silverthorn who broke in on goal and buried a wrist shot past Lawday to score a short-handed goal to level the scores. With Tigers back in the game, Sheffield stepped up the pace and scored two quick goals. First, Lake scored a power-play goal from close range which was closely followed by a goal from Stanislav Lascek. With Tigers reeling and struggling to keep pace with the speedy Sheffield forwards, they were presented with a power-play chance after a needless penalty taken by Jason Hewitt, cross-checking Kieran Brown right in front of referee Matthews. Tigers made Sheffield pay with Clements scoring a low shot into the bottom left-hand corner of the goal to cut Sheffield’s lead.  Tigers then leveled the score with a terrific goal. Austin Mitchell-King used his speed to break in on goal and shot in off the bar to beat Lawday and draw the sides level at 3-3.

Sheffield scored next after a long spell of pressure in the Telford zone and Tigers guilty of a number of icing infractions and failing to clear the puck. Liam Kirk scoring his second of the game with a tap in past Day.

Sheffield would have one final power-play chance in the period after Cole Shudra was called for slashing. Despite the numerical disadvantage, however, Tigers would go into the break level after scoring a second short-handed goal. Brilliant play by Lachowicz saw the diminutive winger win the puck in centre ice, skate behind the Sheffield goal and send a pass in front for Clements to score his second of the game.

Tigers started the third period well with Dan Mitchell hitting the post, closely followed by Brown hitting the crossbar but the crucial next goal in the contest was scored by Sheffield. Jonathan Phillips tapping in from in the goal crease after a perfect pass from Ben O’Connor.

Tigers had a power-play chance shortly after with James Spurr called for slashing, but Sheffield added a sixth goal whilst short-handed. Liam Kirk sealing his hat trick with a shot through Day’s legs. The goal deflated the Tigers team and, shortly after, a long-range shot from O’Connor went through Day and into the net for Sheffield’s seventh goal to give the scoreline a slightly flattering look to it.

Sheffield took the two points and Tigers head into their final game away to Raiders in Romford on Saturday.

After the game Head Coach, Tom Watkins, commented, “It was a good game of hockey but it was a tough loss on the night for the team. We played with lots of commitment and at 4-4 in the third, I think we hit 2 or 3 posts which obviously changes the game. Clinically Sheffield were sharper and in Liam Kirk, they had a player who I think was the difference between the teams.

I’m really pleased with how we’ve approached all these games. Hopefully, we can round out the competition with a win on Saturday.”