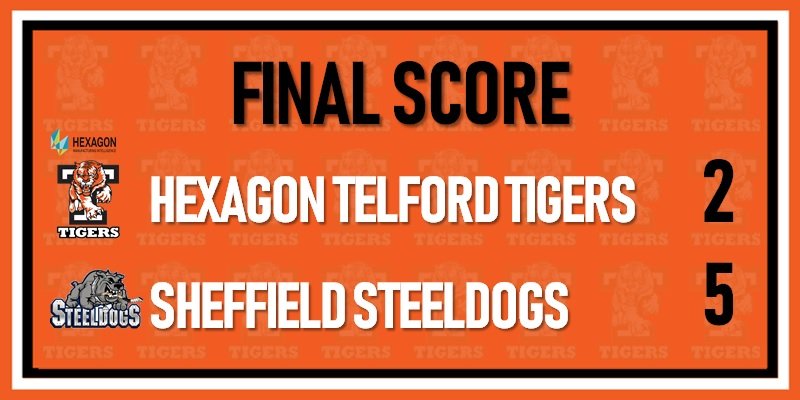 Lacklustre Tigers 1 Fall to Cup Defeat.  Hexagon Telford Tigers 1 faced off against Sheffield Steeldogs at Telford Ice Rink on Saturday night in the NIHL North Cup. Tigers had won all three of their games in the competition this season having beaten Solway Sharks, Billingham Stars and Blackburn Hawks. Tigers sat fourth in the table (2 points behind the visitors) and were without Joe Aston, Warren Tait and Denis Bell but added Ryan Lewis to the line up as back up net minder.

The game was fast paced early on with both teams making plenty of hits and working hard. Sheffield opened the scoring in the 8th minute when a shot by Tim Smith hit a Tigers’ defender and landed perfectly for Duncan Speirs to score. Tigers had the perfect opportunity to level the game in the 17th minute when Sheffield’s Andrew Hirst was given a slashing penalty but instead, Tigers found themselves caught out on the break. Sheffield’s Nathan Salem hit a shot which was saved by net minder Tom Hovell brilliantly, but the rebound fell to Speirs, who tapped home his and Sheffield’s 2nd goal of the night.

The 2nd period was only 10 seconds old when Jonathan Weaver turned the puck over on the Tigers’ blue line, which allowed Milan Kolena to skate in on goal and fire a shot past Hovell for Sheffield’s 3rd goal. Tigers continued to press without any joy, with both Adam Taylor and Dan Mitchell being denied by Sheffield’s net minder Brandon Stones. Tigers finally got on the score sheet in the final minute of the 2nd period. Taylor scoring from close range after being found by Andy McKinney’s pass from behind the goal.

In the 3rd period, Tigers pushed to get back into the game but were undone again whilst on the power play. Sheffield broke in on the Tigers’ goal whilst short handed. Liam Charnock’s shot was saved by Hovell, but once again Sheffield were first to the rebound, Cameron Brownley scoring to take Sheffield 4-1 ahead. Tigers gained some hope in the 53rd minute when McKinney pulled a goal back with a powerful shot past Stones after Joe Hazeldine’s initial shot had deflected into his path.

Tigers pressed during the final 5 minutes but could not make their pressure pay and took a time out in the 59th minute. Net minder Hovell was pulled to give Tigers an extra attacker but they could not score. Sheffield scored an empty net goal, from Adrian Palak in the final 30 seconds to seal a 5-2 victory.

Man of the match: Tom Hovell.

After the game coach Tom Watkins said, “It was a lacklustre performance. We were out worked, lost too many battles and didn’t compete hard enough. We didn’t execute simple passes and didn’t create any chances. It was a frustrating night for sure. In the first 10 minutes, I thought we started ok and they got a bit of a fortuitous goal that came from a blocked shot which fell kindly to their player’s stick. We then proceeded to give up two short handed goals and we showed a distinct lack of desire.”