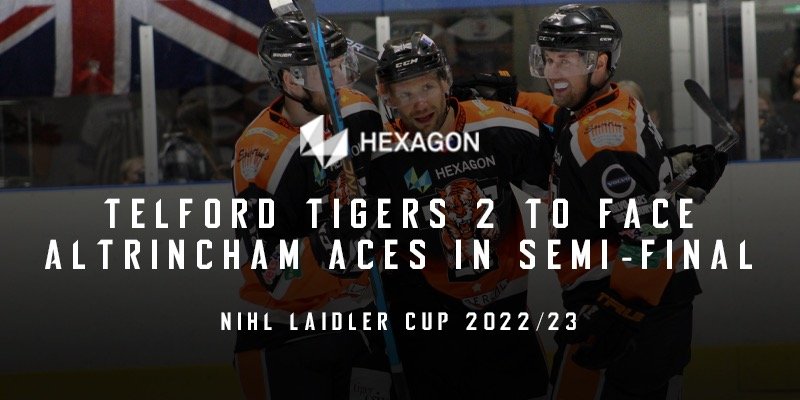 A four-point weekend for Tigers came from the Laidler side first hosting Altrincham Aces last Saturday. Goals from Gordon, Jones, Preece, Hunt, Washburn, Jets, Griffin and not to mention Liam Bartholomew’s goal from the halfway line, were the story to the 8-2 victory on home ice.

A trip to the Skydome Coventry to face local rivals Coventry Blaze NIHL the following day was another story to tell. Another two goals from Liam Bartholomew and Paul Davies as well as defenceman Mike Jones making his mark with his second goal of the weekend allowed the Tigers to sail through to the cup semi-final following their 5-2 victory.

“We are delighted to have secured our place in the Laidler Cup semi-finals with our latest win to put us top of our group. This year we are looking to go one better than just reaching the final and to add the cup to our trophy cabinet. Overall our focus will always be on the league and as defending league champions we have a target on our backs every week we play but after not achieving to win the cup last year we are certainly motivated to try our best this year.

Obviously, we have ambitions to win every competition in the league but we never rest on our laurels and previous successes and we go out to win every game we have regardless.

Facing Altrincham in the semi-final will be a challenge. With them being a team to beat us in overtime this season, we will look to put the score right in this match and hope to book our place in the finals again this year.”

Meanwhile, in Group B, Hull Jets clinched the top spot in the table, with Altrincham Aces trailing behind in second place. The final standings for each group are as follows;

The Cup competition for the North 2 league included one home game and one away game in the group qualifying stage with the league being split into two groups. The top two sides of each group are to then play a two-legged semi-final in January in the format, Group A 1st vs Group B 2nd, Group B 1st v Group A 2nd.

Following the outlined format, the proposed semi-final fixtures will be as follows;

We will soon be announcing the fixture date and ticket details for the semi-final home fixture of Telford Tigers 2 vs Altrincham which is expected to take place in January 2023.

The 2022/23 Laidler Cup Final will take place in February 2023 and will be played over two legs, one home and one away fixture. Details on these fixtures will be released following the results of the semi-finals.

Watch out for further details about Club news at Telford Tigers, visit: https://www.telfordtigers.net/news or catch up on Facebook or Twitter.