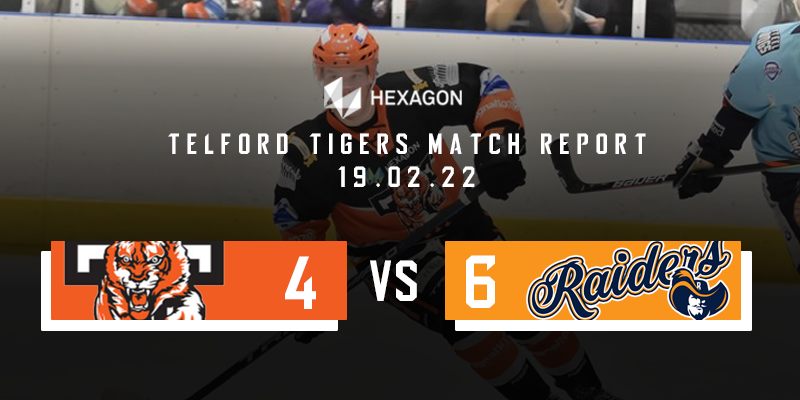 Late Goals Send Tigers to Defeat. Hexagon Telford Tigers played the first of back-to-back games against Raiders at home. Tigers led the league by four points and this game represented the game in hand over second-placed Swindon. With Tigers having won all four meetings between the sides this season, this represented an ideal opportunity to extend the lead at the top of the standings.

The opening period was fast-paced and went very quickly. Tigers opened the scoring midway through with a well-worked goal. Scott McKenzie sent Vladimir Luka clear on goal and Luka passed across to Jack Hopkins who shot first time past Michael Gray in the Raiders’ goal. Raiders equalised late in the period with a power-play goal after Austin Mitchell-King was called for hooking. Aaron Connelly scored with a low shot past Brad Day.

Tigers made a scrappy start to the second period and owed Day for keeping the scores level. The Tigers’ netminder, however, could do nothing to stop Oliver Baldock from scoring from close range with a powerful shot to put Raiders in front. Tigers struck straight back, equalising within eleven seconds! Danny Rose sent a pass from the Tigers’ blue line that sent Fin Howells on a breakaway allowing Howells to score with a brilliant finish. Tigers then fell apart, conceding two goals in quick succession. Tommy Huggett scored after a long period of possession in the Tigers’ defensive zone. Then Jake Pitchley scored with a tap in after a good pass from Lukas Sladkovsky. Coach Tom Watkins called a time out after the fourth goal to rally the team and this seemed to work as late in the period Tigers struck back with a third goal. Corey Goodison’s long-range shot was tipped past Gray by Ricky Plant to narrow the Raiders’ lead at the end of the period.

Early in the third period, Tigers drew level. Scott McKenzie slammed the puck home after Luka’s shot was saved by Gray. With both sets of players pushing hard for the win, the game-winning goal was a disappointing one for Telford. Danny Rose’s clearance from the Tigers’ defensive zone hit a Tigers’ player who was skating to make a line change and bounced perfectly for Jake Sylvester to shoot past Day.

Tigers pulled Day from the goal for the final minute to add an extra attacker but this just allowed Raiders to seal the game with Sladkovsky scoring an empty-net goal.

Tigers lead at the top of the league standings remains four points with Tigers travelling to Romford for their next game.

After the game Head Coach Tom Watkins commented, “It was a disappointing result for us, but take nothing away from the Raiders they deserve the win and full credit to them. They are another team who have benefited from our errors which seems to be a common theme at the moment and something we have to eradicate quickly. Of late defensively we have been poor and won’t win many games when we give up 6 goals.”