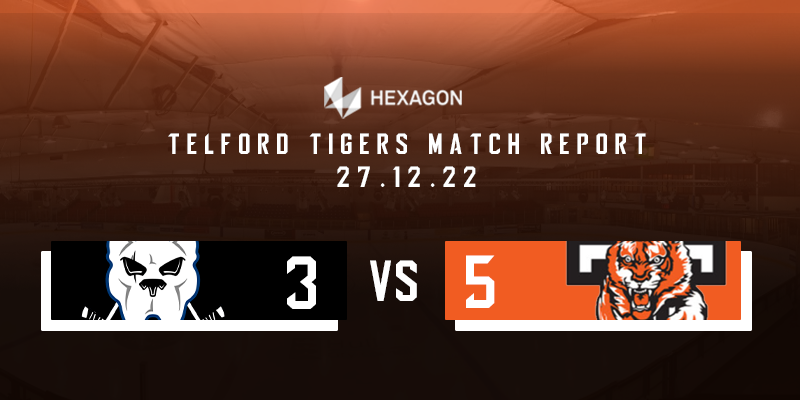 Luka Treble Ends Tigers Winless Run. Hexagon Telford Tigers travelled to Bristol for their first of back to back games against the league’s newest team. Tigers were on a demoralising run of nine consecutive defeats and were desperate to get back to winning ways. The Shropshire side made their final road trip of the year without Jonathan Weaver and Nick Oliver but the rest of the roster were available.

Tigers’ alarming run of defeats had seen them slip to seventh place in the league standings which is just on the edge of the playoff qualifying places and just one place above the hosts, who had two games in hand on Telford.

Tigers had conceded the first goal in the majority of their recent defeats so it was important that they scored first. Jason Silverthorn scored in the sixth minute of the game to put Tigers ahead. Within thirty seconds of taking the lead, Telford were two ahead. Fin Howells scoring to put Tigers firmly in control of the game.

With Tigers ahead, they controlled much of the first period and were disappointed to end the period only a goal ahead after a Bristol scored with just seven seconds of the period left. Ben Solder finishing off a Bayley Harewood pass.

With less than five minutes of the second period left, Bristol were level after Elliot Lewis scored to draw the sides level. Tigers hit back almost immediately with a goal from Fin Howells to end the period 3-2 ahead.

Bristol were pushing for the equaliser at the start of the third period and drew level again within five minutes of the restart with Christian Mohr scoring.

With the game in the balance, Tigers were nervous and thankful for Brad Day a number of times for keeping the score level. With the game entering the final stages, Telford regained the lead – Vladimir Luka scoring his second of the game to give Tigers a lead to hold on to.

Bristol pulled netminder Will Kerlin from goal for the last minute of the game to add an extra attacker but this backfired when Luka was able to shoot into the empty net to score a hat trick and seal the much needed victory for Telford.

The teams face each other again in Telford in their next game.

After the game Head Coach Tom Watkins, commented, “The whole team worked hard and I am delighted to get the win. It felt really good. The team can now enjoy that win even though it wasn’t pretty but it is a good win on the road. At 3-3 it was very tight and could have gone either way but Brad Day was seeing the puck really well and Vlad Luka was lethal in front of goal. I thought we showed a lot of mental strength to snap that losing streak.”