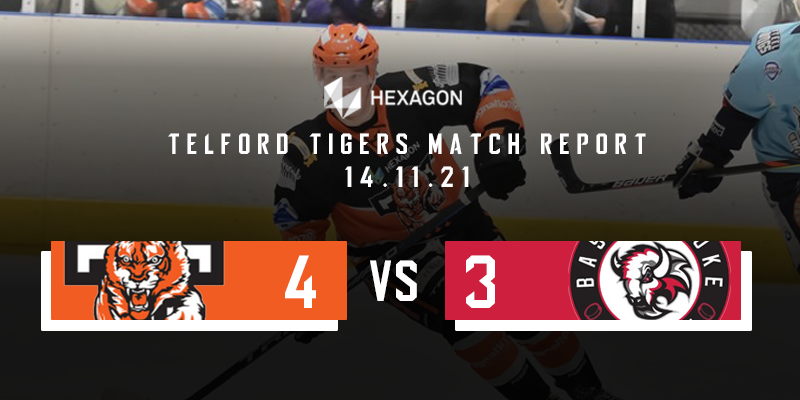 Magnificent Seven for Tigers. Hexagon Telford Tigers returned to home ice to face Basingstoke Bison in the NIHL National Division on a six-game winning streak in the league competition. Tigers were unable to ice Ross Connolly, Jack Watkins and Ricky Plant but welcomed back Brad Day to the lineup as starting netminder.

Tigers made a fast start to the game and Basingstoke seemed unprepared for the intensity of the Tigers’ forwards. With constant pressure on Dan Weller-Evans in the Basingstoke goal, it was no surprise when Telford opened the scoring in the third minute. Deakan Fielder had taken Plant’s position on the top line and rewarded his team with the first goal of the game. Fielder won the puck in a board battle with a Bison defender and sent a fierce shot towards goal from a tight angle, which caught out Weller-Evans and beat him low at the near post. Tigers added a second on the power play after Alex Roberts had been called for high sticking. The power play had almost ended when Andy McKinney sent a shot at the Bison goal and although Weller-Evans stopped the puck with his pad, Jack Hopkins was on hand to force the puck home from almost on the goal line. Tigers continued to have all the possession and added a third goal in the seventeenth minute. Jason Silverthorn led a 2-on-1 breakaway with Fielder and fed the puck to the Tigers’ forward who shot low past Weller-Evans to score his second and Tigers’ third of a dominant period for Telford.

The second period saw Bison play in a much more aggressive manner and within the first 5 minutes Adam Jones of Basingstoke and Tigers’ Joe Aston had dropped the gloves and both received a 5-minute fighting penalty. Nick Oliver was then sent to the penalty box for 4 minutes for roughing. The game became scrappy and Basingstoke had succeeded in breaking up Tigers’ passing game for much of the period. But, with four minutes left on the clock, Tigers added a fourth goal. Tigers held possession in the Basingstoke defensive zone and eventually worked the puck to the blue line where Jonathan Weaver sent a slap shot in on goal which was tipped by Austin Mitchell-King in front of Weller-Evans and into the net.  Basingstoke managed to get on the scoresheet late in the period with a power-play goal. Scott McKenzie was called for holding allowing Jones to score from long range to reduce Tigers’ lead.

Tigers made a poor start to the third period, conceding within a minute of the restart. A defensive turnover left Zack Milton with a tap in to reduce the lead to two. The rest of the period was scrappy and Basingstoke had much better possession than the previous two periods, making Day work in the Tigers’ goal. Tigers were defending desperately and had their backs against the wall as Bison pushed to get back in the game. A late Thomas McKinnon penalty gave Tigers problems and as the penalty expired, Basingstoke scored again through Aidan Doughty from close range. With the goal being scored with less than 30 seconds of the game left, Tigers held on to win the game and record their seventh league win in a row.

After the game Head Coach Tom Watkins commented, “We had a great start, I couldn’t ask for a better first period to get us going. We moved the puck very well, used the points well, spread the zone and were able to generate a lot of offence from good end zone time.

We knew Basingstoke would come back hard in the second period but we also didn’t help ourselves taking as many minor penalties, as we did, killing six minutes before the Bison scored on their fourth power play that period. It kept us on the back foot and also tires key players when we are already playing short. Basingstoke pushed very hard through the third and, had the game been a couple of minutes longer, they may have tied it up but you’ve got to look at the commitment of our guys in those final minutes blocking shots. Weaves (Weaver) must have blocked 5 shots himself in that series of play and it’s a great example to our team when you see him putting his body on the line like that.”