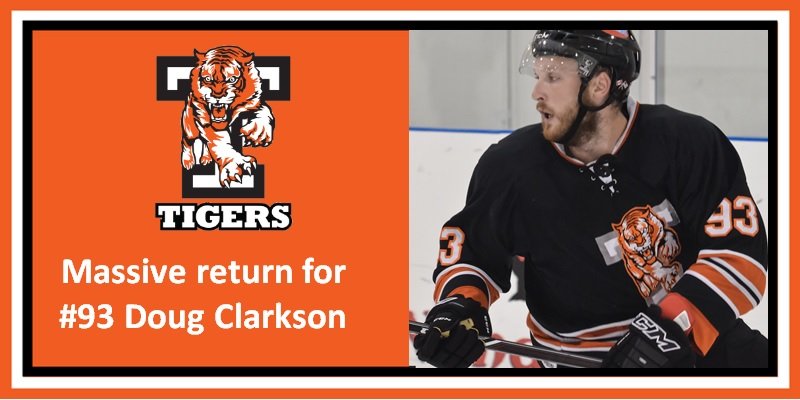 Telford Tigers 1 are very pleased to announce the re-signing of 6ft 5 Doug Clarkson for the forthcoming 2018/19 season. The 29-year-old Canadian forward, who previously played for Tigers in the 2016/17 EPL winning team, scoring 83 points, including 50 goals in 53 games as well as contributing 96 PIM’s in the league campaign. Doug took a year out last season to pursue his fire fighting training.

General Manager and Head Coach Tom Watkins said, “This is a huge coup for the club on so many fronts and I’m very happy to sign a guy we all know will settle into our team and dressing room very well. I think this is the biggest signing in the NIHL this summer and will add huge amount of anticipation and excitement ahead of the season for Tigers fans. He is idolised by the fans here and is a great ambassador for the club.

On the ice he’s a leader and character that will improve the team undoubtedly, he adds goals as we’ve all seen before, has a very heavy snap shot which I don’t envy any goalie standing in front of.

He’s got great hands, uses his reach and can protect pucks very well.  His presence alone should make every guy on our roster play a foot taller and stone heavier as we all know he will stick up for his teammates. Doug is not a dirty player at all but won’t let anyone take any liberties either.

As a club we hadn’t planned this, and it came a little out of the blue. We acted very quickly to make this possible and we are very grateful as a club to those that have supported us to be able to bring Doug back to Telford. Doug will arrive in Telford in early October due to commitments back home.

We look forward to seeing him back on the ice.”

Doug commented on his signing, “I am very excited to be coming back to the UK and playing back in Telford.

After being home in Canada and pursuing my career after hockey, I realised I still had the desire to play and my wife and I both decided if I was going to, it should be sooner rather than later. We also decided that Telford would be the best fit since we spent our last year there and it was such a memorable one with the team, staff, sponsors, and most of all the fans.

I can’t wait to get back to Telford and win some more trophies, it should be an amazing season!”

Doug’s own and loan shirts are available to order now for £100 each (Home and Away). Please see the own and loan registration page for more details and to register.