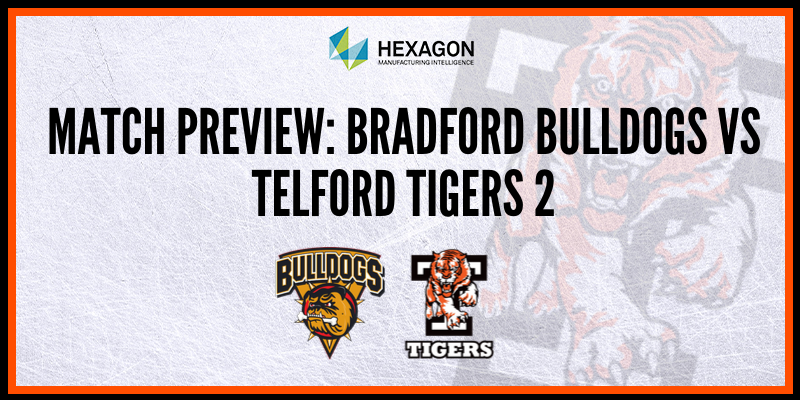 This weekend Telford Tigers 2 make a trip to West Yorkshire where they will face Bradford Bulldogs in their first clash of the season.

Last season, Bradford secured their place at the North 2 Laidler Play-Off weekend for the first time in the Club’s history. Since then, the Yorkshire side have pulled some big wins against rivals Deeside Dragons and Altrincham Aces. Bradford Bulldogs now sit second place in the League table having played only four games. Widnes Wild and Telford Tigers 2 are currently the only two teams who are unbeaten [in regulation time] so, Tigers 2 will certainly be looking to take home two points, giving them the early slot at the top of the League table.

Tigers 2 Assistant Coach Doug Wildman is keen to keep the pace up within the team following last weekend’s performances commenting;

“Our first double header weekend of hockey of the season went well. A very close and physical home game against Sheffield went to the wire and we were on the wrong end of final goal in an overtime game. Some good lessons were learnt and there were many positives to be take away from the team’s performance.”

“On Sunday we travelled to Deeside, which is always a challenging away fixture. Deeside came out and started the game very strong and we never seemed to settle into our style for the first 10 minutes. By the second period we had found our system and started to control the game. An incident at the end of the second forced an extended break before the third started but as the game resumed, we asked the lads to up the pace and keep the foot on the gas which they did perfectly and we ran out 6-1 winners.”

Telford Tigers 2 will face-off with Bradford Bulldogs at Bradford Ice Arena, Saturday 28thSeptember at 16:45. Follow the game with live updates on Twitter by following @TelfordTigers2