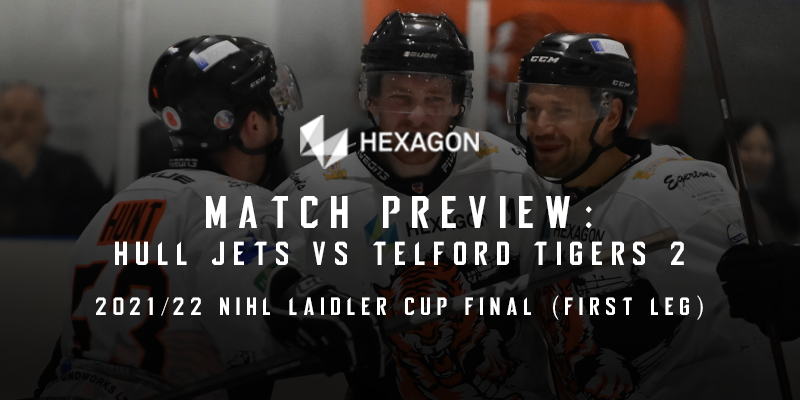 At the start of the season, Telford Tigers 2 were categorised into the Midlands group of the Cup alongside local rivals Coventry Blaze NIHL, Nottingham Lions and also NIHL North 2 returnees, Sutton Sting. Grouped in the North was Hull Jets, Bradford Bulldogs, Sheffield Titans and Altrincham Aces.

After finishing at the top of the Midlands Cup group table, Tigers 2 were set to play runners up of the North group, Bradford Bulldogs in a two-legged semi-final. Tigers came out on top in the semi-final back in December winning 14-3 on aggregate.

In the second semi-final of the Cup, Sutton Sting took on Hull Jets falling three goals short in the first leg. Hull went into the second leg with the advantage but found themselves losing the second-leg three goals to four. Despite the trailing result, the Jets managed to take the semi-final win on aggregate goals.

As did Tigers for the Midlands group, Hull Jets finished top of the North group on 10 points; dropping only two points as part of the group stage to fellow Yorkshire side Bradford Bulldogs.

Whilst Jets sit fourth of the Laidler league table, the East Yorkshire side have had a solid start to the season, winning over 80% of their games played. With the majority of their games being played as part of the Laidler Cup, Hull are still expecting to spring out of their starting blocks when they begin playing more games in the 2021/22 League campaign.

The first leg of the Laidler Cup final will be the first time the two finalists meet for the 2021/22 having been separated in the groups stage of the Cup and having not yet met in a league game.

The last time the two teams faced each other in a deciding fixture was back in 2019 during the Laidler North 2 play-offs. The two teams were drawn to play in one of the semi-finals after finishing in the top four of the league table, which took place on neutral ice at Planet Ice, Widnes. The Jets came out on top winning the semi-final against Tigers 2 four goals to one and found themselves close to lifting the trophy however, it wasn’t their season either finishing as runners up of the North 2 Play-offs final after a 6-3 defeat against Widnes Wild.

That said, Hull have managed to bag some silverware in recent seasons, taking home the 2019/20 league title after the season was abruptly cut short due to COVID. Fixtures that could not be fulfilled due to the lockdown were finalised as 0-0 draws and 0 points, leaving the table toppers Jets to be awarded the league title.

There are no doubts that the Jets will be looking to advance on their position as hosts in the first leg of what will be an exciting Cup final.

Next Saturday, it will then be down to Tigers take the reins and host the second and concluding leg of the Laidler Cup Final…

“After a good run in the cup, we are looking forward to playing the two legs of the final against Hull. We know they are a very well organised team and play good hockey, but so are we.

This will be a great test for us and if we play our way and give our all every shift there isn’t any more we can ask of the lads. A good solid performance away will set us up for a fantastic and exciting final game at home next weekend.”

The first leg, and away leg of the Laidler Cup final for Telford Tigers 2 will take place on Saturday 15th January at 17:30 in Hull. Follow the game with live updates on Twitter by following @Tigers2Scores.

Safe journey to our travelling team, staff and Telford Tigers supporters who are making the journey up to Hull.

Match night tickets can be purchased in advance for the second leg of the Laidler Cup Final online here! Don’t miss out on our exclusive ticket promotions for this fixture. Click here to find out more!