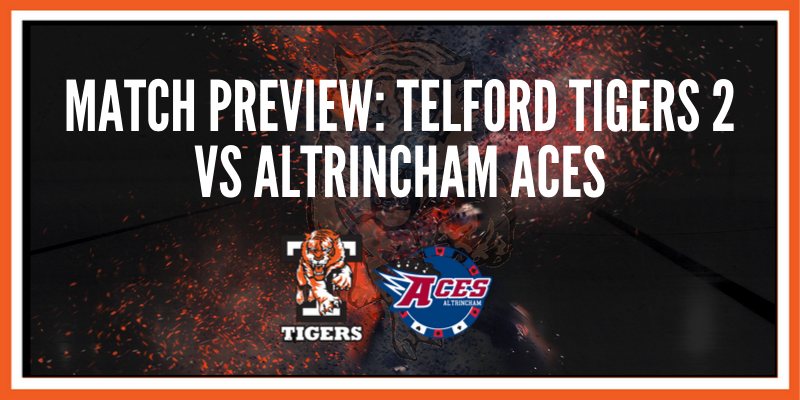 This weekend, Telford Tigers 2 will welcome Altrincham Aces to Telford Ice Rink for the opening game of the 2019/20 Laidler League Campaign.

The past few weeks have been jam packed with pre-season preparations ahead of the new season beginning. Just over two weeks ago, Tigers 2 faced a double-header weekend with friendly fixtures against Deeside Dragons, the first game of which resulted in a draw on home ice. The following day, Tigers 2 turned up the heat managed to take home a win, with a 4-8 result.

Speaking with Tigers 2 assistant coach Dougie Wildman, he said how the pre-season weekend was a great and interesting start to the season.

“Reflecting on the pre-season weekend’s games, they were an interesting couple of games to analyse. Head Coach [Ces] asked the lads to go out and perform different jobs which they’re used to, with some of the guys being on different lines with line mates they’re not particularly used to playing with; but he was impressed with the pace and effort demonstrated. Not only did our outfield players perform, but all three netminders performed well and that gives us a dilemma we are welcome to have.”

With a few key players missing from the pre-season weekend, both games were a test of how the rest of the squad could handle the game.

“We had short bench on both days, but the guys who were given the opportunity certainly gave their all and we can’t ask more than that.

There were lots of positives we can take from the two games and a lot of areas we can still work on. We’ve had four practice sessions since the pre-season, and I’m sure we will be better prepared and ready to go out and do the Tigers badge proud.”

Telford Tigers 2 will face off with Altrincham Aces on Saturday 14thSeptember at Telford Ice Rink, at 19:00.

Tags:2019/20Telford Ice Rink
previousHarrison back on the blue line for Tigers 2
nextTelford Tigers 2 ace it against Altrincham!