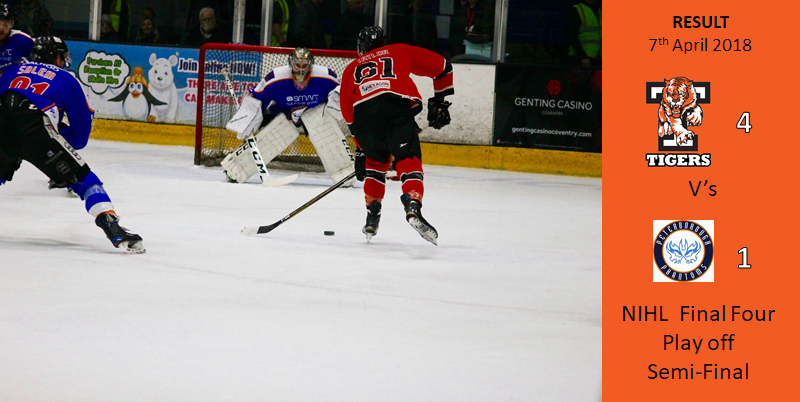 Telford Tigers 1 faced off against Peterborough Phantoms on Saturday in the semi final of the NIHL Final Four Playoffs at Coventry Arena on Saturday afternoon. Tigers had qualified for the semi finals by beating Sheffield Steeldogs in the NIHL Moralee play offs to win the north playoffs and play against the runners up from the south playoffs.

At the start of the game Tigers were slow to get going and had trouble clearing the puck from their defensive zone, providing Peterborough with some opportunities. As the game went on, Tigers started to gain the ascendancy with Jason Silverthorn, Jonathan Weaver and Adam Taylor all going close. Tigers finally made their possession dominance pay in the 16th minute, when Weaver’s shot from the blue line was tipped on goal by Silverthorn. Euan King in the Phantoms’ goal saved the shot with his pads, but Ricky Plant was in the perfect position to fire home the rebound and give Tigers a 1-0 lead at the end of the 1st period.

Tigers started the 2nd period on top, with Scott McKenzie tipping a shot inches wide. In the 26th minute, Peterborough took a too many men penalty putting Tigers on the power play. Joe Miller hit the inside of the post with a powerful wrist shot but the puck somehow didn’t cross the line and was cleared. Shortly after, whilst still on the power play, Tigers scored their second goal. Weavers’s shot was deflected into the path of McKenzie who made no mistake with a close range finish.

Tigers added a third goal in the 31st minute whilst on another power play. After gaining control in the Peterborough zone, Weaver hit a firm pass to the far post for Macaulay Halford to tap home.  Peterborough responded with a goal from James White when Tigers couldn’t clear the puck and got caught with some tired players on the ice, with Peterborough taking full advantage. Tigers ended the period with further pressure on the Peterborough goal but could not add to the score with the period ending with Tigers 3-1 ahead.

Peterborough started the 3rd period much better and Tigers’ net minder Denis Bell was called into action a number of times. Peterborough had a power play in the 52nd minute and Bell made 3 crucial saves including a miss hit clearance from Weaver. With 3 minutes of the game remaining, Peterborough pulled King from the net to give them an extra attacker. Peterborough laid siege to the Tigers’ goal with Bell proving to be a one man wall, stopping everything that was thrown at him. As the game entered the final minute, McKenzie won the puck in his own defensive zone and sent the puck the length of the ice into the empty goal for his 2nd of the game, sealing a 4-1 victory and Tigers’ place in the final.

After the game coach Tom Watkins said, “I am pleased to advance to the final. After a tentative start we got into the game and to win the first two periods gave us that little cushion. Peterborough pushed us extremely hard and had us on our heels through the third period. It felt like an age and they managed to get a lot of shots through with their man advantage, but what a relief it was when Scott managed to seal it.

The guys battled hard and now it’s time for them to get some rest and prepare for the final, whilst the coaches stay on to watch the second game to scout both teams.”