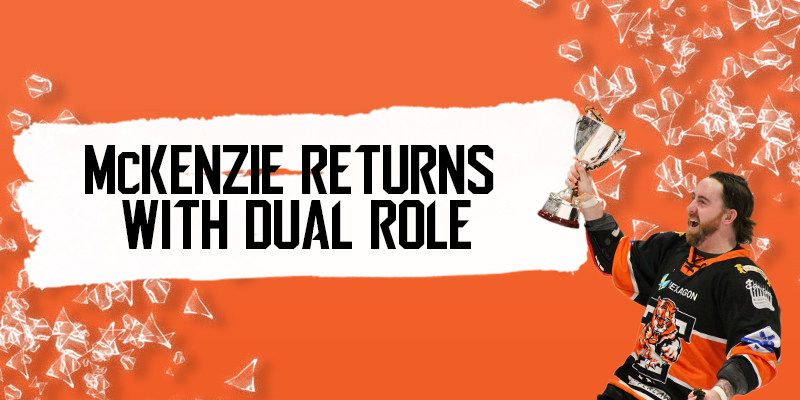 McKenzie returns with dual role! Telford Tigers are pleased to announce the return of Scott McKenzie for the 2020/21 season. McKenzie will return for his ninth year with the Tigers and will wear his trademark number 77 shirt. McKenzie was the team’s top scorer with 72 points last season and will be a key player in the roster for next season.  Scott will also be taking on a new role within the club as Head Coach of the Tigers 2 team. McKenzie will oversee all team matters for the NIHL Division 2 club, but will hand over the reigns on match days to the Tigers 2 Assistant Coach, who is soon be announced.

Scott stated, “It’s great to be re-signing for Telford Tigers for the 2020/21 season. Last year, as everyone knows, was an extremely successful season for the club and I feel really privileged to have been a part of that. I built great chemistry with Brandon (Whistle) and Rick (Plant) towards the end of the season which made my decision to come back really easy. When you’re enjoying your hockey, you don’t want it to end. It was a shame the way the season finished but safety for the players, staff, volunteers and fans was obviously the most important thing. If we can put together a similar team, I feel like we can continue to be competing for trophies and there is no other club I want to win trophies with.”

On being appointed Tigers 2 Head Coach, McKenzie stated, “I’m really excited to get started with Telford Tigers 2. I’ve taken a step back from coaching in a senior capacity since leaving Deeside Dragons a few years ago to concentrate fully on playing, but I feel like this was an opportunity not to be missed. I want to help continue the pathway for juniors to make the step into senior hockey but our main goal has to be to challenge for silverware. There’s a lot of work ahead, especially due to the current Covid-19 situation and when hockey will return, but I’m relishing the challenge.”

Tom Watkins, Head Coach and General Manager, said, “I couldn’t be happier in welcoming Scott back for another season. Firstly, let me congratulate Scott and his partner Clarice on the birth of their daughter in April. It was a wonderful moment for both of them. Scott was one of the first guys I signed when I began coaching the Tigers over 10 years ago and I’ve got to say he’s up there as one of the best signings I’ve made. His on ice performances are there for all to see, he contributes in every department 5 on 5, face offs, power play and penalty kill; penalty shots, 3 on 3, scores big goals, is an accomplished shot blocker and keeps getting better and better each season. That’s the stuff most people see, but it’s also the person behind all of that, that goes into making him such an important signing.  His attitude and character are first class, he has a love for the game which is one thing but his passion for the club, for Telford Tigers is unquestionable. He’s an extremely humble guy, has a lot of time for everyone and pays it forward more than most. He gives up his spare time to help coach and support young hockey players at various levels and supports charity events where he can. In the time I’ve known him, he’s someone who I talk to regularly and bounce ideas about games and players off. He’s shares my desire for the team to be successful, his knowledge of the game is first class, he is very coachable and a leader for his teammates. What I really like about Scott is that he cares, he cares about his teammates and the club and that shows an excellent example in my book.”

Watkins also commented on the appointment of McKenzie as Tigers 2 Head Coach, “I think this is a great addition to our coaching team. Scott brings a wealth of playing experience and has an excellent knowledge of the game from which to influence the team. He’s a very keen and passionate coach, having coached at different levels of junior and senior hockey along with various conference teams. This is a return to a coaching role he has done previously, he will oversee all coaching matters concerned with the team as he did in the past with the exception of game days if there is a clash with the National League Team. This will give the club excellent continuity between the National League team and the Laidler Division team. Scott is very familiar with how I work, with regard to strategies and systems. This will allow the teams to share similar philosophies and identity, but of course Scott will bring his own ideas and personal characteristics to the role. I’m excited to support him build a group and then watch him mould them into a competitive team.”

Scott’s own and loan shirts are available to order now for £100 each (Home and Away). Please see the Tigers’ Online Shop for details.

In the 2020/21 season, Tigers are again offering individual player sponsorship at £400. The package will include a personalised ‘SPECIAL’ exclusive third jersey with a company name or family name patch, announcements on match nights, a small advert or logo in the match night programmes and a signed player photo.  The jersey will be worn for cup games and play-off games and will not be available as a replica.