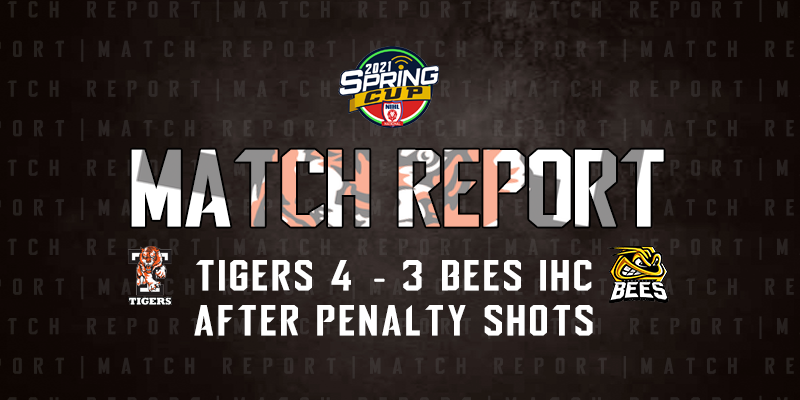 McKenzie Shootout Winner for Tigers. Hexagon Telford Tigers returned to home ice on Sunday afternoon to take on Bees IHC in the Spring Cup. Tigers’ defeat at Swindon on Friday, coupled with Sheffield Steeldogs’ win over Bees the next day, meant that Tigers could no longer win the Cup as they trailed the Yorkshire side by 6 points and could only draw level with them on points. Having lost twice to the Steeldogs already, this meant Sheffield had a better head to head record over Telford and therefore they could not be caught.

With second place up for grabs, Tigers needed a win to increase their lead over third-place Swindon and to break their run of three consecutive defeats.

Tigers were without Corey Goodison and Sam Jones but welcomed back Dan Mitchell into the lineup.

In goal for Tigers was Jordan Hedley and Adam Goss in goal for Bees IHC.

Tigers had made a sluggish start to the previous game and continued in the same vein. A forgettable first period saw Bees take the lead in the fifth minute with a fortuitous bounce falling their way. Lewis Hook’s shot went wide of the goal by some margin but bounced off the backboard and landed on the other side of the goal, perfectly placed for Ciaran Long to tap into the net. Bees went close shortly after with a shot from Vanya Antonov hitting the crossbar.

Tigers offense was restricted to long-range shots with Goss able to deal with everything hit at him.

The second period was five minutes old when Tigers had a glorious chance to get back in the game. A penalty shot was called after a Bees defender stopped a Jason Silverthorn rush by throwing his stick to prevent the Tigers’ captain from shooting at goal. Goss made a pad save with the penalty shot to keep Tigers out.

Tigers were not passing well and had struggled to put Bees under pressure but a clean hit by Tigers’ Kieran Brown sparked a comeback. Bees were attempting to answer the hit and committed a roughing penalty. From the resultant power play, Tigers scored. David Clements hitting a shot from the right circle which hit a Bees player in front of Goss and bounced into the net.  From the next attack, Bees gave away another penalty and Tigers scored their second goal on the power play.  Robert Lachowicz drew the Bees defence and sent a pass across the ice to the unmarked Jack Watkins who fired a one-time wrist shot past Goss into the top corner.

With Tigers dominating they lost focus and, with just five seconds of the period left, Bees regained the lead. Antonov breaking in on goal and shooting over Hedley’s shoulder into the roof of the net to give Bees a 3-2 lead going into the third period.

Tigers had plenty of possession in the third period and had a number of chances to equalise. Brown went close and then Scott McKenzie almost scored but Goss, in the Bees goal, made a fantastic save. A goalmouth scramble saw Tigers have three shots in quick succession, including one from Lachowicz that hit Goss and trickled wide of the goal.

Tigers’ pressure finally told as the game entered the final two minutes of regulation. Jonathan Weaver won the puck in the slot and timed his shot perfectly to beat Goss, who was screened by Jack Watkins, to draw the sides level and send the game into overtime.

A goalless overtime period saw Bees go closest to winning with a Deakan Fielder shot hitting the crossbar. With no further scoring, the game would go to penalty shots to decide the winner.

Both sides saw their first two shots saved. Long scored for Bees and then Ross Venus scored to send the shoot out into sudden death.

Long stepped up again first for Bees but Hedley saved his shot, leaving McKenzie the chance to win the game. McKenzie sent the puck between the legs of Goss who slid back into the net, taking the puck with him to give Tigers the two points and a much-needed victory.

Man of the Match: Kieran Brown.

After the game Head Coach, Tom Watkins, commented, “It was a very ugly, lucky win which totally flatters us as a team because other than for 10 minutes in the second period, we were outplayed.  We didn’t create any quality chances as Bees didn’t give us any time and space, and did a good job of keeping us to the outside. We got going in the second when Browny made a couple of good hits but other than that, I thought we were lucky to win the game.”