McKenzie Wins it Late for Tigers 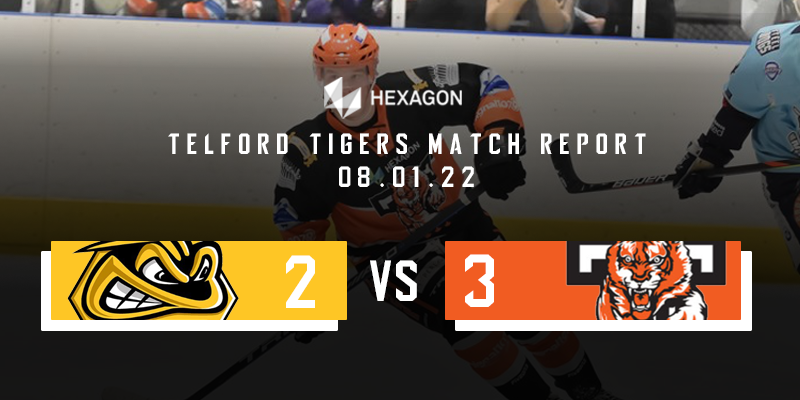 McKenzie Wins it Late for Tigers. Hexagon Telford travelled to Slough to take on the Bees having lost the top spot in the league without playing a game. Tigers title rivals Swindon Wildcats were awarded a 5-0 win for a game with Raiders that was called off before Christmas and Milton Keynes had won on Friday against Basingstoke Bison. The results had seen Tigers drop to third place but they had the benefit of two games in hand on their rivals.

Tigers had been short benched in recent games and remained without the services of Ricky Plant and Jack Watkins. Andy McKinney was serving the final weekend of his eight-game suspension and was joined on the sidelines by Jonathan Weaver, Jason Silverthorn and Corey Goodison. Thomas McKinnon was able to return, along with Head Coach Tom Watkins who returned to the bench after missing the last two games.

The start to the game was delayed slightly as Tigers had to change their jerseys after both teams came to the ice for the game wearing black. Tigers returned to the locker room and came back wearing their turquoise warm-up shirts.

An even first period saw little in the way of clear cut chances for either side with both Brad Day in the Tigers’ goal and Bees’ netminder Curtis Warburton not making many saves. With the rink in Slough being relatively small, the game saw a lot of broken plays and a lack of fluidity. The one moment of quality came five minutes from the end of the period. McKinnon shot from a tight angle and Warburton made the save with his pads but he could only push the puck out to Vladimir Luka who hammered the rebound into the net before Warburton could recover his position.

Bees were the better team in the second period and Tigers were penned in their own defensive zone for long periods and forced to ice the puck numerous times. It was no surprise then that Bees equalised midway through the period. Harvey Stead made a drop pass to allow Dominik Gabaj to skate unopposed in on the Tigers’ goal and send a shot low past Day into the bottom right-hand corner. With Tigers struggling to get any offense going, they eventually found a second goal. Scott McKenzie and Jack Hopkins combined to find Luka unmarked in the slot. The Czech forward smashed the puck past Warburton but the puck hit the back of the net and bounced out immediately causing confusion. Luka celebrated as the game carried on around him with Bees taking possession of the puck and attacking. The game continued and when the next stoppage occurred, all four officials conferred and spoke to the goal judge who could not confirm if the puck went in. The officials continued their lengthy discussions and were finally awarded the goal.  Tigers headed into the final period ahead by a goal but needed to up their game.

The third period was similar to the second period with Bees dominating much of the play but not creating many clear cut chances. Tigers gifted Bees a power-play chance with too many men on the ice penalty. Bees scored with seconds of the power play left. A shot from Ed Bradley was deflected by Bayley Harewood past Day to draw the sides level. With overtime looming, Tigers hit back immediately with the goal that proved to be the winner. McKinnon hit a slap shot that struck Warburton’s pads and rebounded into the goal crease where McKenzie was on hand to score.

With time running out, Bees pulled Warburton from the goal to add an extra attacker but Tigers defence saw out the game for a valuable and hard-fought two points.

After the game Head Coach Tom Watkins, commented, “It was a solid performance and an excellent result. The whole team were totally committed and focused on the job at hand and we executed the game plan perfectly. We knew we would have to battle hard every shift, we knew it would be close and, at times, we spent too much time in our defensive zone but we didn’t feel like we weren’t in control of the situation and I’ll happily take 50 icings tonight to helps us readjust and take the flow out the game.  We had six key players out of the lineup tonight but we still managed two huge points on the road. Everybody put the team first and had a winning attitude.”