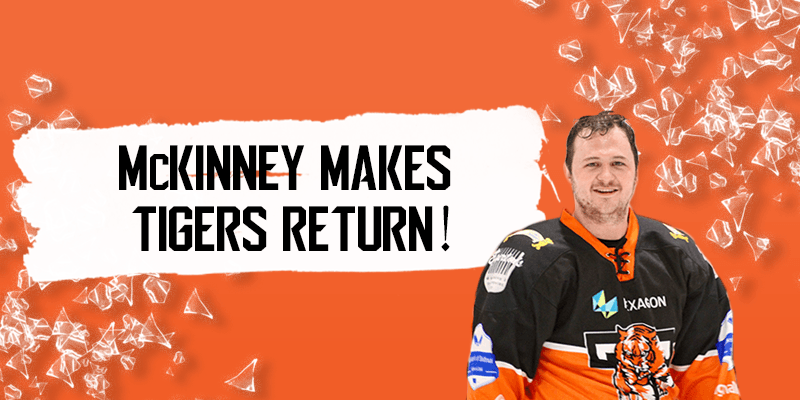 Telford Tigers are delighted to announce the return of fan favourite Andy McKinney for the 2020/21 season. McKinney returned to the club two years ago after four years away and was a key part of the team during last year’s NIHL League and Cup double winning team scoring 37 points. McKinney will continue to wear the number 91 shirt.

McKinney stated, “I’m looking forward to another year in a Tigers jersey, we did incredibly well last season and we have a great group of core players. We will be back in the hunt for more trophies next year but other teams around the league will be bolstering their lineups, so we need to come in with the right mindset. Every team will be looking to beat us on a nightly basis. I can’t wait for the season to start.”

Tom Watkins, Head Coach and General Manager, said, “I’m very pleased Andy is back with the club, he’s a fan favourite and it’s easy to see why. He plays with a lot of heart, wears his heart on his sleeve and plays that hard nose, energy style that is not only appreciated by fans but also his teammates and coaching staff. Andy had an extremely difficult season on a personal level away from the rink but when he got to the rink he was able to focus on the hockey as a distraction. I’ve got a lot of admiration and respect for how he was able to cope and not allow anything to affect his performances. He’s the type of player that every team wants and needs. For me he is the best in the league in this role, but not to pigeon hole him at all he’s got a lot of skills that contribute to his game. He plays hard, plays with commitment and a lot of passion. He is a strong skater with good speed and through his skating ability challenges the opposition on and off the puck. He’s extremely capable of putting the puck in the net and I expect him to be a 20 plus goal scorer for us. He’s not just capable of scoring but chips in with big goals, goals that really change the momentum of the game and get the team going. I am delighted he’s committed to us for the new season.“

We would also like to thank GN Groundworks who have agreed to be Andy’s individual sponsor for a further season. Andy’s own and loan shirts are available to order now for £100 each (Home and Away). Please see the Tigers’ Online Shop for details.