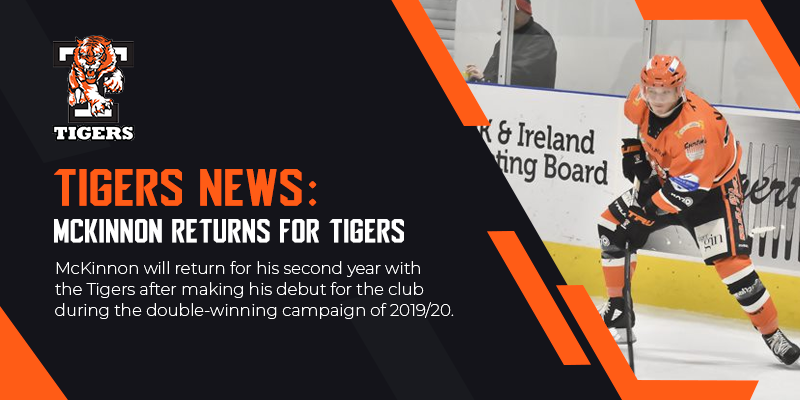 McKinnon Returns for Tigers. Telford Tigers are pleased to announce the return of defender Thomas McKinnon for the 2021/22 season. McKinnon will return for his second year with the Tigers after making his debut for the club during the double-winning campaign of 2019/20. McKinnon was no stranger to the penalty box during his last season, racking up a league highest of 190 penalty minutes. Thomas will continue to wear the number 84 shirt.

McKinnon stated, “It’s great to be back after all this time away and I am happy to return to Telford for the forthcoming season. To win the double in my first season with the club will take some beating but maybe we can go one better and win the treble. The league was tough and we had to work hard every game, there are no easy games at this level and that is the part of the game I enjoy most. I am a competitive person and thrive under the pressure. Next season will be tough but we know that Tom will have a competitive roster and the fans will be behind us all the way, I am excited to get back on the ice with the team and get the season going.”

Tom Watkins, Head Coach and General Manager, said, “Thomas is one of those guys who turned us from competitors into contenders. When I brought him to Telford there was a little uncertainty as to where he would fit in the line-up, having not seen him play regularly. At the time I was desperate for a top-four D-man, someone I could pair with Danny Rose and thankfully we were rewarded with one of the most committed, grittiest guys in the league. He’s a no-nonsense defenseman who takes his defensive responsibilities very seriously and takes pride in his plus/minus (one of our leading guys in this stat last season). He competes every night, you know exactly what you going to get from Thomas every game, he’s very consistent in his performances, he loves to compete and battle, he thrives on that side of the game. The pairing of Danny and Thomas was key to our success last season, they were constantly matched up against the league’s best players and more often than not outperformed them. Thomas is a great guy in the room, well-liked in the dressing room and by the coaching staff for his winning attitude.”

Telford Tigers would like to thank Chips Away for their support and individual sponsorship of Thomas for the forthcoming season.

Thomas’s own and loan shirts are available to order now for £100 each (Home and Away). Please see the Tigers’ Online Shop for details.

In the 2021/22 season, Tigers are again offering individual player sponsorship at £400. The package will include a personalised ‘SPECIAL’ exclusive third jersey with a company name or family name patch, announcements on match nights, a small advert or logo in the match night programmes and a signed player photo.  The jersey will be worn for cup games and play-off games and will not be available as a replica.