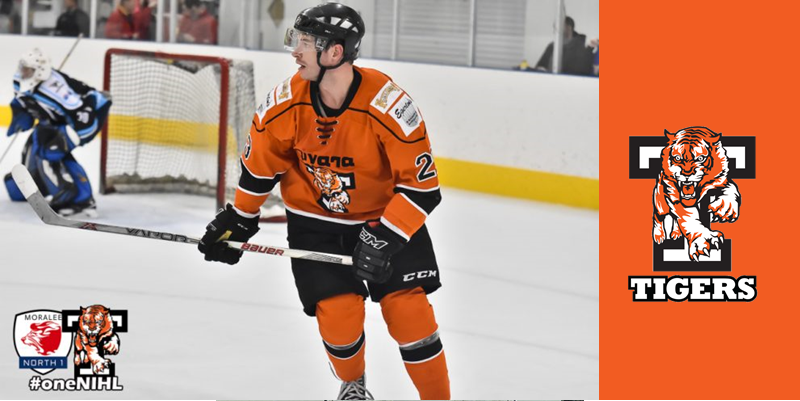 Telford Tigers Head Coach, Tom Watkins has confirmed the return of forward Joe Miller to the team to bolster the Tigers playoff push, “Since Joe left the team earlier in the season, I’ve kept in touch with him and jokingly asked him a few times if he was available. I reached out on Monday morning after we qualified for the Finals, I think the appeal of playing for a trophy and the short term nature of the situation has made it possible for him to return. He skated with us twice this week and the team were excited to have him back on the ice.”

Joe stood down from his role with the Tigers mid-season, due to increased work commitments with a new job, he said after his first practice with the team, ‘It was good to see the guys again, I’ve been following since I left and was really pleased to see the Team had qualified for the Final Four. I’m looking forward to the next four and games being part of a successful post season.”

This is a big lift for the club ahead of the Conference Finals with the Sheffield Steeldogs for both the team and fans, Watkins finished by saying “Having Joe available at this stage is a big boost for us, I’ve had the kit on again the last few weeks as we’ve been left short by injuries and clashes of fixtures with the U18 team games, but with Joe returning means I’ll be able to take my place behind the bench. We all know what Joe is capable of and he gives us another edge.”

With just over 24 hours remaining until the final Tigers D1 game of the season, don’t miss out on what is sure to be another exciting weekend of Playoff Hockey.

Tickets are available from Box Office