Mitchell-King the Shoot Out Hero for Tigers 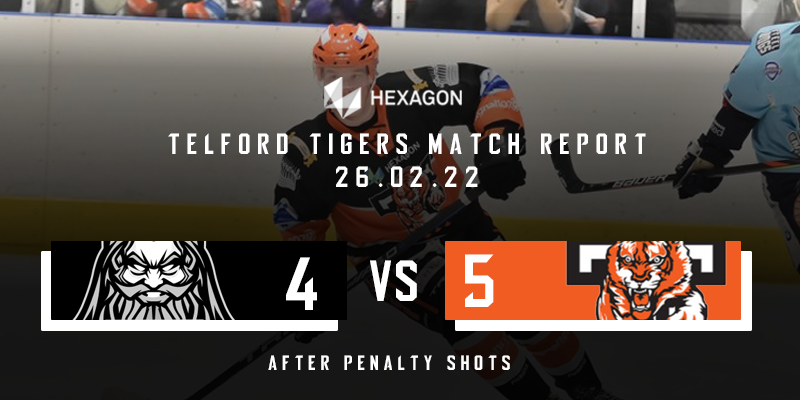 Mitchell-King the Shoot Out Hero for Tigers. Top of the table Hexagon Telford Tigers travelled to Milton Keynes to play the third-placed Lightning in a crucial league game. With Tigers seven points ahead and holding a game in hand on Milton Keynes, the home side needed to win to put any pressure on Telford in the league standings. With Tigers breaking a three-game losing streak last weekend with a victory over Raiders in Romford, a four-point lead was held at the top of the league over Swindon Wildcats.

Tigers made a bright start and pressured Matt Smital in the Lightning goal early on. Milton Keynes had the first power play of the night when Thomas McKinnon was called for tripping. Despite this, Tigers would score the first goal of the contest whilst shorthanded. Corey Goodison won possession of the puck by the Tigers’ goal and sent a pass out of the defensive zone to Austin Mitchell-King who skated in on goal unopposed and shot past Smital to give Tigers the lead. With Telford having the better of the exchanges, it was no surprise when a second goal was scored. Vladimir Luka blasted the puck through Smital with a fierce shot. Luka went close again shortly after with Smital making a good save.

The second period was full of penalties and Milton Keynes took full advantage of a 5-on-3 power play early in the period. With Joe Aston and Jack Hopkins serving penalties, Tim Wallace shot high past Day to get Lightning on the scoreboard.  Tigers fired back with a goal on their own 5-on-3 power play. Jonathan Weaver waited patiently to pick out the unmarked Jason Silverthorn who shot into the open net with Smital committed to the other side of the goal.

With five minutes of the period to play and Telford firmly in control of the game, defensively the team lost their heads. Corey Goodison turned the puck over unnecessarily allowing Wallace to pass to Bobby Chamberlain who shot past Day to narrow the Tigers’ lead. With seconds of the period left, Andy McKinney was guilty of a turnover on the Tigers’ blue line, giving possession to Adam Laishram who skated in on goal and shot past Day as the buzzer sounded to end the period. Referee Miller awarded the goal and Tigers had thrown away the lead.

With the trips to the penalty box continuing for both teams, it was Tigers who went ahead after another power play. Hallden Barnes-Garner was serving a tripping penalty and Tigers created and scored a terrific goal. Ricky Plant combined with Fin Howells to set up Silverthorn for his second goal of the night with a low shot past Smital.

With the game entering the final five minutes of the third period, Milton Keynes had one more power-play chance after Howells was given a harsh elbowing penalty. Tigers’ penalty kill was superb, with Brad Day pulling off three incredible saves to deny the Lightning. But with just six seconds of the power play left, Wallace managed to shoot past Day with a powerful wrist shot to draw the sides level and force overtime.

Tigers were under pressure early on in the extra period with Day called upon once again to make a terrific double save from Leigh Jamieson and then Chamberlain. With no further scoring, the game went to a penalty shoot-out.

Milton Keynes scored their first two shots with goals from Liam Stewart and Wallace. Scott McKenzie and Luka both missed for Telford, handing the advantage to Lightning. But with the next three Lightning shots being saved by Day and Bayley Harewood and Jack Hopkins scoring for Tigers, it left Mitchell-King the chance to win the game. The Tigers’ forward stepped up and beat Smital with a great finish. Telford take the win and see their lead at the top extended to five points after nearest rivals Swindon lost on penalty shots to Leeds.

After the game, Head Coach Tom Watkins, commented, “What a game, what an atmosphere, and a great crowd, over 2000 people I believe.  The crowd were very loud all night and I tip my hat to the travelling Tigers’ fans who made themselves heard despite the huge number of Milton Keynes fans. I think when you get to overtime, obviously, the game could go either way so to come away with two points is huge. They are a very talented team, very skilled, very quick and have now come back from being behind on a couple of occasions against us, so you know they have the character and won’t quit.

The young players’ Jack Hopkins, Bayley Harewood and Austin Mitchell-King came up with the goods in the shootout with Brad shutting the door at the other end. We go back to work again against the Bees at home in our next game.”