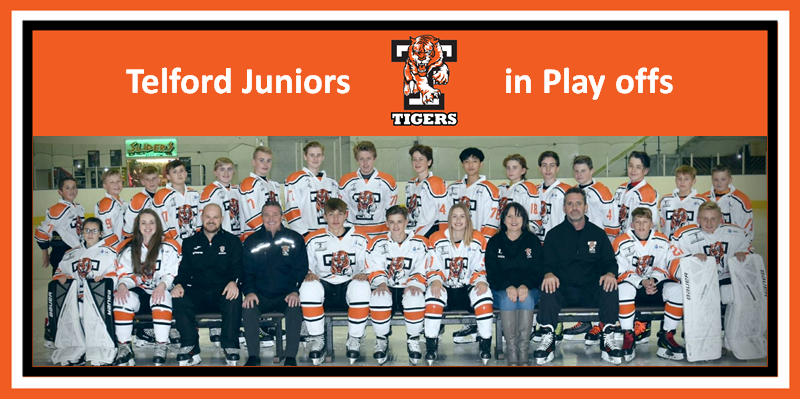 Telford Tigers U15 and U13 teams faced off at Ice Sheffield in the EIHA North Promotion / Relegation games on Sunday 13th May.

The U15 team made a perfect start, Alex Blake skated into the offensive zone and hit a powerful slap shot through Kingston net minder Oliver Goodman into the net after just 10 seconds of the game. This would prove to be the only goal of a close period.  Four minutes into the 2nd period, Kingston equalised through Tyler Sheard and then shortly after added further goals from Adam Jasecko and Oliver Peers to leave Kingston with a 3-1 lead going into the final period.

Just 18 seconds into the 3rd period, England U15 captain, Sam Watkins weaved through the Kingston defence and made a perfect pass to Kyle Hughes in front of the goal for Hughes to tap home.  Kingston restored their two goal lead in the 32nd minute through Sheard’s second of the game. Straight from the face off, Watkins skated in on goal and sent a wrist shot into the top corner to cut the lead to one. Tigers then took full advantage of a penalty awarded to Kingston’s Peers to level the game. Sandis Moiks tipping Watkins’ shot past Goodman. As the game appeared to be heading to overtime, Tigers were hit with a cruel blow to end the game. Kingston’s Isaac Cornell’s shot from the left circle – with just 2 seconds of the game left – crept in to the net to give Kingston a 5-4 win and relegate the U15 team to Division 2.

Minutes later, the U13s took to the ice to attempt to secure promotion.

Tigers started the game strongly and took the lead in the 2nd minute. Daniels Serkins hit a wrist shot from the left circle that flew past Coventry net minder Owen Chester.  Coventry hit back in the 10th minute when on the power play. Louis Molyneux was called for a slashing penalty and Coventry scored through Charles Coney. Tigers regained the lead in the 20th minute with a power play goal of their own, Taylor Stanton firing a wrist shot into the top corner of the net.  Coventry equalised in the 30th minute, again on the power play with James Mayer scoring from close range after Tigers had failed to clear the puck from their zone.

In the 32nd minute, Serkins scored his second goal and the best goal of the game when he back handed the puck into the top right hand corner from a tight angle, giving Tigers a 3-2 lead. As the game neared the end, Tigers were clearly feeling the pace of the game. Coventry took advantage in the final minute to equalise through Jake Hayward, leaving the score 3-3 at the end of the 3rd period and sending the game into sudden death overtime. The overtime period saw no further goals, resulting in a penalty shoot out to settle the game

Tigers went first in the shoot out and scored through Taylor Stanton. Coney missed for Coventry giving Tigers the advantage after the first round. Molyneux took the next shot but hit the bar and Finley Wall scored for Coventry leaving the shoot out tied 1-1 after two rounds. Serkins shot was then saved, leaving Jake Hayward a chance to win the game. Hayward’s shot was saved by Tigers’ net minder Hal Griffiths leaving the shoot out level after three rounds, meaning the shoot out would got to sudden death. Tigers’ Howells went first but his shot rang off the post. Griffiths then saved the next shot from Barnabas Sari. Kyle Watt stepped up for Tigers and scored with a neat wrist shot past Chester.  Coventry’s Mather then had to score to keep the shoot out going, but Griffiths made a terrific save to win the game and send the delighted Tigers team into Division 1.