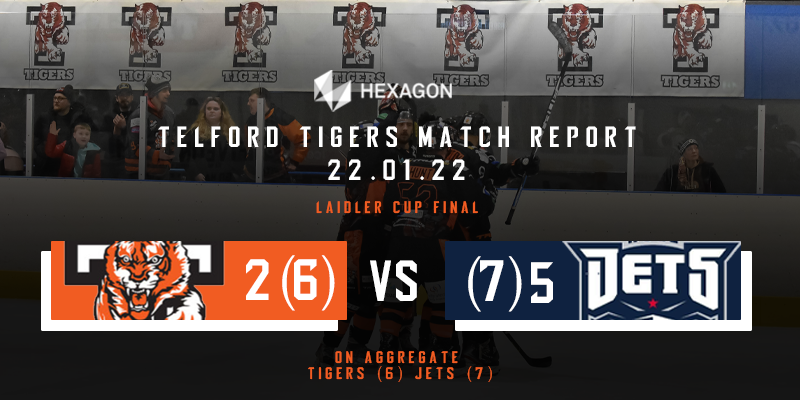 Narrow cup final defeat for Tigers 2. Hexagon Telford Tigers 2 started the second leg of the Laidler Cup final with a spring in their step after a tremendous first leg performance saw the Shropshire side lead by two goals. Visitors Hull Jets had only seen three losses in their form from the start of the season, but Tigers held the Cup final advantage ahead of face-off.

Tigers needed a fast start and an early goal to strengthen the lead, but the first period was lacking in offensive play from the Tigers with the majority of the puck possession being in the Jets’ favour. With less than two minutes remaining in the first period, both teams were desperate for a goal and it was the Jets who managed to capitalise when Kieran Beach found himself on a breakaway and slap shotted the puck above Brown’s shoulder and into the top left of the Tigers’ net.

The puck dropped for the second period and Tigers made the worst start possible. After just 22 seconds a fumble in front of the Tigers net led to the puck trickling through Brown’s pads and across the line, giving the Jets’ their aggregate equaliser. Shortly after, a poor Jets pass from the blueline left Lucas Price to intercept and break through the Jets defence, allowing him to slot the puck into the bottom left of the Jets’ net, giving Tigers a one-goal aggregate lead.

The control of the game didn’t stay in the Tigers’ possession for long, as the Jets responded with their third goal after a poor face-off in the Tigers’ defensive zone led to Gowan Beddoes dishing the puck to Forster who tapped the puck into the bottom right of the Tigers net, equalising the aggregate score once again. Before the period ended, Jets’ regained control of the game after Tigers’ defenceman Preece struggled to clear the puck allowing Hogarth to sweep bobbling puck into the Tigers net.

The final period was all to play for, but a penalty on Callum Griffin in the neutral zone for interference gave the Jets the man advantage which they managed to capitalise on when Boris Giba managed to shoot through the Tigers defence and Brown in nets to give them a two-goal lead. Tigers were desperate for a goal to be in for a chance of winning the game back and the game started to get heated.

An altercation in front of the Tigers net with Keyes and Jets’ Hogarth resulted in Tigers taking the powerplay advantage after Hogarth was ejected from the game after hooking Keyes between the legs. The man advantage worked out in the Tigers’ favour after Anderton found himself slotting the puck in the back door of the Jets’ net after silky passes from Liam Preece and Karol Jets. Both teams took their time outs, with Tigers taking theirs in the 51st minute and the Jets with only 34 seconds remaining on the game. With limited time remaining, Tigers piled on the pressure for another goal, but it didn’t turn out for them. The final buzzer sounded and Hull Jets took the win of the game as well as becoming winners of the Laidler Cup after Tigers trailed by only one goal on aggregate.

After the game assistant Coach, Dougie Wildman commented, “We were unfortunate at the weekend and we were beaten by a good side. We had prepared as best we could and not much had changed from the weekend prior when we had won the first leg.

The game started at a fast pace and Hull got to the pucks first. We didn’t put as much pressure on them as we should have and we allowed them to reverse the situation and keep us under the pressure. We created a few chances, but I think Hull had the more clear opportunities in the first two periods and capitalised on that and got the goals. We rallied a strong attempt in the third period to get back into the game, but it just wasn’t enough to take the game to extra time.

Losing a cup final is always a bitter pill to swallow but more so when it’s by one goal and we had a comfortable two-goal lead going into the game. I know we are better than Saturday’s performance, so we will be back working hard at practice this week.

Congratulations to Hull who were worthy winners.

We want to thank the supporters for turning up in huge numbers and didn’t stop cheering us on all night. We hope to see them again at our next game at home this weekend where we look to get back to winning ways and perform like we know we can and have all season so far.”