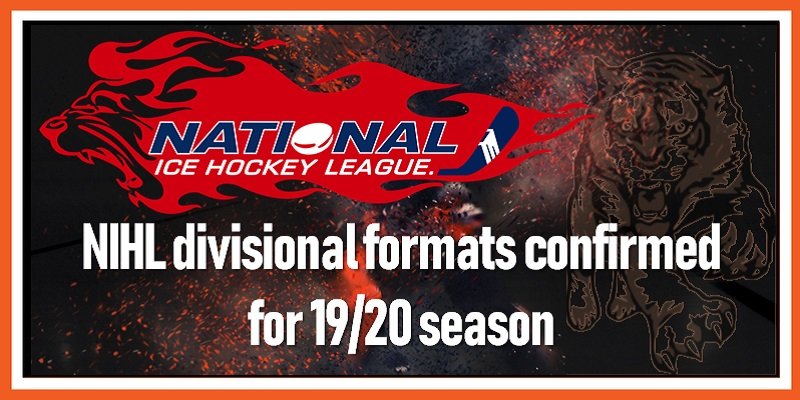 NIHL Divisional formats confirmed for 19/20 season. The clubs and management of the National Ice Hockey League (NIHL) held their annual section meetings this past weekend and agreed the format of competitions for the 2019/20 season starting in September.

A new ten team national division, NIHL National, comes into existence to sit above the long-standing Division 1 and 2 which are both regionalised into North and South.

Some finer details around exact format of some Cup and Playoff competitions is still to be signed off by some divisions but the details below are confirmed.

Teams will play their own conference four home and four away, while they face the other conference twice at home and twice away.

There will also be a National Cup where the first home game for each club against the nine other clubs will count towards the qualifying standings.  The top four sides from this table will qualify for cup semi finals.  The highest placed qualifier will choose their semi final opponent, with the two remaining sides also matching up.  The Cup should have reached at least the semi final stage by the end of the calendar year.

The season will likely begin on September 14/15 and it was confirmed the NIHL National will continue with the same ‘import’ rules as last year.  Teams can dress two ‘imports’ with only one being allowed on the ice at any one time.

The teams will play two home and two away against each other for the regular season, with the top eight sides qualifying for post-season play.  The exact format of the playoffs will be confirmed in due course.

A number of teams expressed interest in a cup competition and discussions are ongoing.

Once Cardiff’s participation is confirmed then the structure for the regular season will be announced along with playoffs.

There will be a South 2 Cup this season which will culminate in a Cup Final Weekend.

The league season will be two home and two away against each other, with the top six sides qualifying for postseason play.  This will take the form of two groups of three sides – 1st, 4th, 6th and 2nd, 3rd, 5th – playing one home and one away to decide semi finalists and so on.

There will be additional cup competitions to include Murrayfield Racers and Dundee Comets from SNL along with Widnes Wild from NIHL North 2.  The sides will play in two groups of five.  Solway, Whitley, Billingham, Murrayfield and Dundee in one group, with Solihull, Blackburn, Sutton, Nottingham and Widnes in the other.  The number of Cup fixtures is still to be confirmed by the teams involved.  Each group will have its own knockout stages to decide the cup winners.

North 2 clubs will play two home and two away against each other with the top four sides qualifying for the playoffs.

NIHL Division 1 and 2 seasons are likely to begin on 7/8 September.  The winners of North 1 and South 1 are likely to play at the Coventry weekend for a national championship game. There is also an appetite to retain the NIHL2 championship game which has played at Coventry for the past two years.  NLMG are investigating options for this fixture.

The annual review of Rules of Competition is underway while clubs will be providing their available dates to the NLMG to begin the fixture list compilation.

The NIHL management would like to thank all clubs and their representatives for their valuable input at the meetings and look forward to working with them to prepare for the new season.

Watch out for further details about the latest signings at Telford Tigers, visit: https://www.telfordtigers.net/news or catch up on Facebook or Twitter