The 2019/20 National League season commences in less than two months and the club are pleased to announce the confirmed fixtures for the upcoming season.

Teams will play their own conference four home and four away, while they face the other conference twice at home and twice away.

It is now confirmed that Telford Tigers will begin their National League Campaign with a trip to Basingstoke to face the Bison on Saturday 21stSeptember. The following day, Tigers will then welcome league newbies Leeds Chiefs to Telford Ice Rink for their well anticipated debut clash.

Telford Tigers General Manager and Head Coach Tom Watkins is pleased with the scheduled fixtures for the upcoming season commenting;

“We can really look forward to the start of the season now that fixtures are released. It’s always exciting as you know the season is just around the corner. I’m happy with our schedule and split of Saturday/Sunday home fixtures and look forward to competing in the new National League.”

Before the domestic season is underway, Telford Tigers will face Swindon Wildcats for a pre-season battle of the big cats on Saturday 14thSeptember at Swindon Link Centre, followed by a home fixture on Sunday 15thSeptember.

Full details of the upcoming fixtures will be updated on our fixtures page on our website.

Download the fixtures straight to your phone, tablet or laptop now!

Why not set the Telford Tigers NIHL National League Fixtures as your desktop background. Download the image here 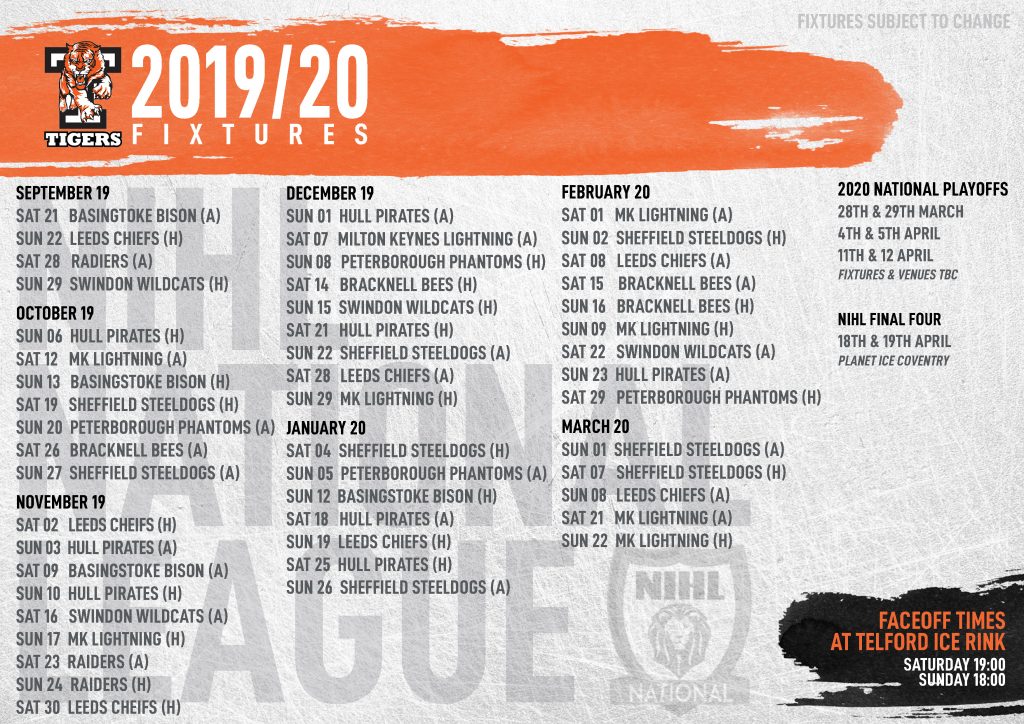 Please note all away fixtures are shown with a 18:00 face-off time and will be updated once confirmed with each club.

All home fixture face off timings are correct