NIHL Player of the Month – December 2017 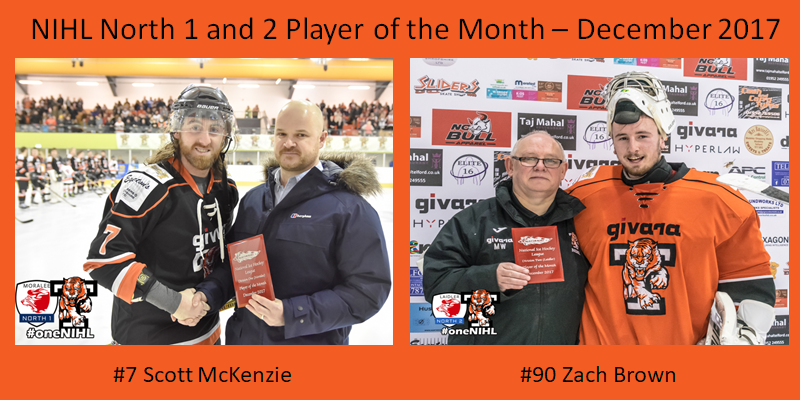 Scott McKenzie and Zach Brown have both been rewarded for their consistency and commitment in December by being named the NIHL Division 1 and Division 2 player of the month.

#7 Scott picks up the North 1 (Moralee). Since re-joining the Tigers 1 he has bagged 19 goals and 15 assists to give a total of 34 points in just 13 games, with 7 goals and 3 assists to give 10 points alone in the month of December where Telford won four from five. McKenzie bagged a pair at home to Swindon and a hat-trick away at Bracknell as Tigers overturned two NIHL South sides in Cup action.

Netminder Zack Brown #90 of Telford Tigers 2 has been chosen for North 2 (Laidler) Player of the Month. Tigers went through December unbeaten with five wins from five including a win at promotion chasing Altrincham. Brown posted an impressive .915 save percentage in the month including a shared shutout against Blackburn, 45 saves against Sheffield and 43 saves at Altrincham.

Congratulation to both players from everyone associated with Telford Tigers