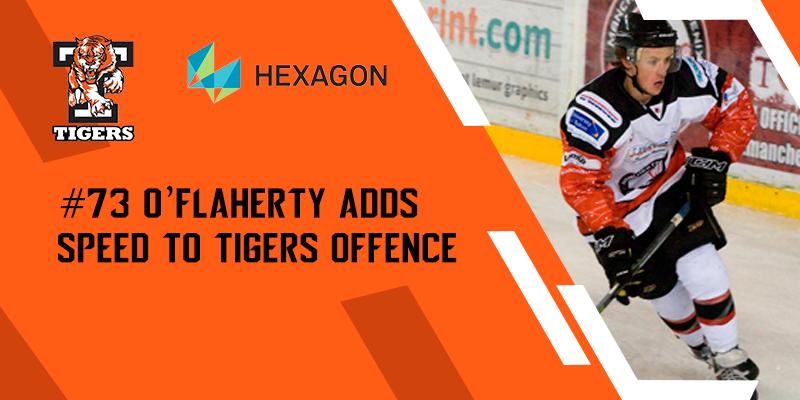 O’Flaherty Adds Speed to Tigers Offence. Hexagon Telford Tigers are pleased to announce the signing of #73 Gareth O’Flaherty.  Gareth joins the roster from Milton Keynes Thunder, having previously secured an EPL winners medal with the Tigers in 2016/17 season.  The addition of Gareth is an additional boost for the team following the recent run of poor form and injuries to key players.

Gareth who will bring flexibility to the forwards as well as experience to the Tigers, having won previous honours in Telford as well as an EIHL Cup with Coventry Blaze.

Telford Tigers Head Coach and General Manager Tom Watkins is pleased to secure another previous Tiger, saying:” Flats is a player who has played with us previously and was part of our league winning team in 2016/17. He’s a good guy and well liked teammate  who will give you honest effort every night. He has good history in the game having played elite league, EPL and NIHL and adds speed to the roster, can play all three forward  positions and I think he will be solid for us in the role we have identified. Another player who will add resilience to the roster, something are currently without.”

Gareth said on his return to Telford: “I’m really excited to be back at Telford, it’s a team that means a lot to me. I started my EPL career with Telford and the team helped me out massively a few years later during a turbulent season which ended with us winning the league title.  I’m looking forward to helping the team by bringing some experience and a defensive mind set as a forward, as we make the push to secure a playoff spot.”

Gareth’s Individual Player Sponsorship is available for a special rate of £200 in additional to his #73 Own and Loans shirts (£125) which are all available from the Tigers online shop for details.

Watch out for further news and scores at Telford Tigers, you can also catch up on TikTok, Facebook, and Twitter or why not be the first to catch up on the match night highlights and subscribe to our YouTube Channel.