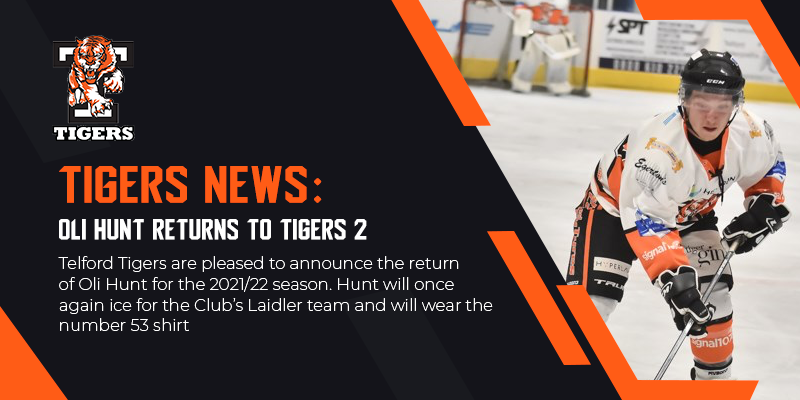 Oli Hunt returns to Tigers 2. Telford Tigers are pleased to announce the return of Oli Hunt for the 2021/22 season. Hunt will once again ice for the Club’s Laidler team and will wear the number 53 shirt.

Hunt began his hockey career during the 2009/10 season where he iced for Telford Venom. Oli continued playing for the U16 team for three consecutive seasons before progressing into the U18 squad, where he iced for Telford Trojans. Hunt’s progression into the U18 squad came as a natural step, as the youngster bagged an outstanding 66 points in only 18 games during the 2011/12 season.

The now 24-year-old, made his first senior appearance in Telford during the 2012/13 season where he appeared for both the Telford Trojans and Telford Titans who at the time were competing in the NIHL North 1 division.

Whilst Hunt has several years of Telford hockey under his belt, the forward also found himself on the Midlands squads starting from Under 11s right up to Under 17s. Hunt also bagged himself a place in the Nottingham Mavericks B squad for two seasons playing in British Universities Ice Hockey Association.

After a few years away from the ice, Oli made the return to Telford Tigers 2 in 2019 where he quickly settled back into the mix with his old teammates.

Telford Tigers 2 coaching team Scott McKenzie and Doug Wildman are delighted to have signed Hunt for the upcoming season, commenting:

“We are very pleased to have Oli back in the squad for another season. Oli works tirelessly on and off the puck and is always prepared to get in the corners and go the extra yard for his teammates. Oli had a couple injuries last year which held him back we think from achieving his potential. We know this year he will be out to make his mark.”

Oli is looking forward to returning to Telford Tigers commenting;

“Very excited to be back in Telford for another year with this great group of lads. This team has a lot of potential with some good experience combined with new young players and with coaching from Scott and Dougie, we have every chance of winning some trophies this year. Can’t wait to get started!”

Oli’s own and loan shirts are available to order now for £75 each (Home and Away). Please see the Tigers’ Online Shop for details.

If you are interested or require more information on the individual player sponsorships, contact marketing@telfordtigers.net.Watch out for further details about new signings at Telford Tigers, visit: https://www.telfordtigers.net/news or catch up on Facebook or Twitter.