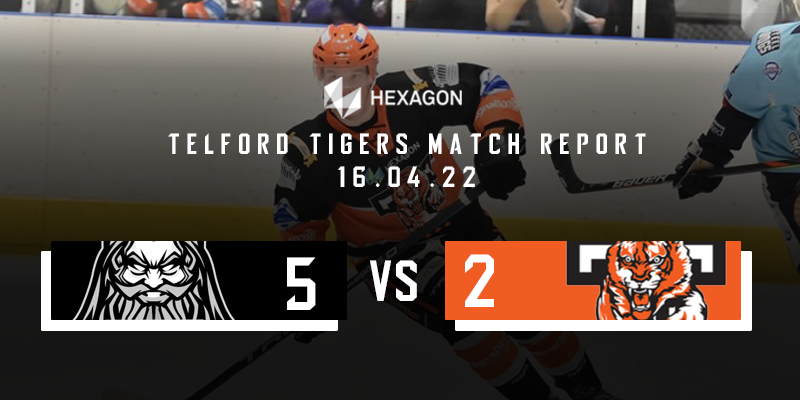 Penalty Woes Lead to Defeat for Tigers. Hexagon Telford Tigers travelled to Milton Keynes for their third game in the National League playoffs after starting the group stage of the competition with back to back wins over Bees. With Milton Keynes having completed a double victory over Leeds Knights, the game saw both teams enter with a 100% record.

Tigers remained without Ross Connolly but welcomed back Jack Hopkins who had missed the last few games after being called up by the Great Britain U18s team.

A disappointing first period saw Tigers create very little in the way of goal chances. Scott McKenzie went closest when his close-range shot was saved by Matt Smital early on but after that Tigers spent most of the period on the back foot and under pressure. Tigers owed Brad Day for keeping out Milton Keynes on numerous occasions, including a terrific save from a Sean Norris breakaway. However, Day could do nothing to prevent the opening goal of the contest. Norris won the puck in the corner and sent a pass in front of the goal where the unmarked Bobby Chamberlain scored with a low shot to Day’s left. Tigers could not get their passing game going and were lucky to not be more than a goal behind as the period ended.

Tigers started the second period in a much better fashion and drew level. Hopkins won possession of the puck at centre ice, entered Milton Keynes’ offensive zone and sent the puck behind him to Jason Silverthorn who hammered a wrist shot past Smital.

Milton Keynes looked dangerous on the break and Mikey Power hit the crossbar with a rising shot that Day couldn’t get near.  Telford then gifted Lightning a 5-on-3 power play. With Jake Price already in the penalty box for tripping, Andy McKinney sent the puck high over the glass from his own defensive zone and was called for delay of game. Milton Keynes scored just ten seconds into the two-man advantage with Norris scoring from close range.

Milton Keynes then added a third goal with one minute of the period left. A shot from distance by Tim Wallace hit Hallden Barnes-Garner’s leg and deflected past Day. With Tigers reeling, they somehow managed to snatch a goal back straight away.

Fin Howells hit a speculative shot from a long distance that went wide of the goal but bounced off the backboards, hit Smital’s skate and bounced into the net to give Tigers a second goal and halve the deficit.

Tigers’ chances of getting back into the game ended early in the third period. A face-off loss in the Tigers’ defensive zone saw the Lightning break away and Tim Wallace set up Barnes-Garner for his second of the game. Tigers’ ill-discipline cost them any chance of a comeback with a steady stream of players heading to the penalty box, giving the Lightning power play after power play and running the clock down as well. Eventually, Milton Keynes added a fifth goal in the final minute of the game. Adam Laishram shot into the roof of the net to seal the victory and end a very disappointing performance with defeat for Telford.

After the game Head Coach Tom Watkins, commented, “It was a very difficult evening for us against a very talented team, probably the most talented group in the league in my view. They were certainly up for it on home ice in front of a very large and very loud crowd. I imagine It’s easy to get up for games with a fan base like that. The noise and support for their team were tremendous.  We competed hard and I thought we’d found our way back into the game twice, but penalties ultimately cost us. Of course, some were deserved but others weren’t. We took ten minor penalties tonight, that’s the most in one game all season and It’s not very often you give up two-five on 3 power plays in one game! It’s not just the penalties you take but the missed calls on the opposition. Two of our players took accidental high sticks to the face but kept playing and there was no call. Andy McKinney fights through two slashes on his hands but no call is made because the referee plays the advantage as Andy recovers the puck. That was a referee’s decision!  When has “the advantage” been a rule in hockey?! This is the first time all season I have mentioned the officials in my post-game comments, but for sure that was the most one-sided officiating we’ve had all season. Milton Keynes deserved the points, no question but how that team finished in 5th place in the league is a surprise, however, they have certainly turned up for the playoffs.”