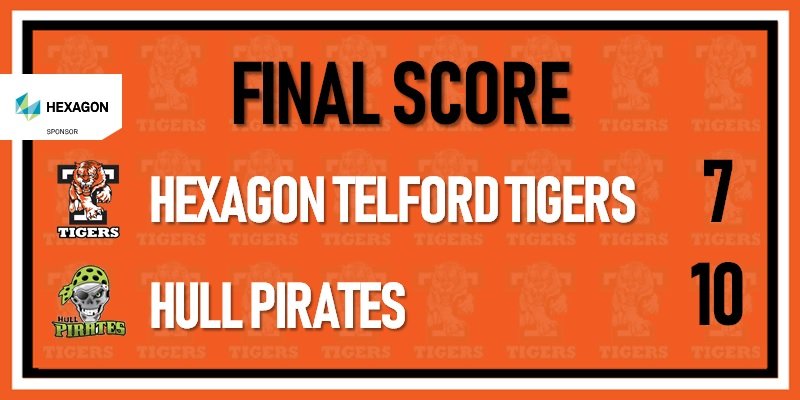 Pirates Sail to Victory.  Hexagon Telford Tigers 1 played the first of two crucial games against Hull Pirates on Saturday night at Telford Ice Rink. Tigers came into the game top of the league two points and two places ahead of the visitors. The previous league game between the teams had ended in a penalty shoot out victory for Tigers with Scott McKenzie scoring the deciding goal.

Ahead of the game coach Tom Watkins had commented, “It should be a great weekend of hockey and the players are certainly looking forward to it. I think if we could put a marker down and claim two points in the home game it would set us up for the weekend. Putting (second-placed) Sheffield aside, if at worst we split the weekend with Hull then we have still got the two point gap over them. So perhaps having the home game first is a good thing for us.”

Tigers were without Corey Goodison, Dan Mitchell and Denis Bell but were able to add Jed Moreland, Fin Howells, Alex Blake, Henry Adams and Zack Brown as back up net minder. Tom Hovell started in goal for Tigers and Ashley Smith for Hull.

Tigers made the perfect start to the game with their first attack of note in the first minute. Adam Taylor and Andy McKinney led a two on one breakaway with McKinney playing a perfect pass for Taylor to slide the puck into an empty net to give Tigers an early lead. Hull equalised in the eighth minute when the Tigers’ defence didn’t clear their defensive zone and a breakdown in play left Jason Hewitt with a tap in to level the game. Tigers responded a minute later with their second goal of the game. Adam Taylor hit the post with a back handed shot, but Tigers recycled the puck to McKinney who found Clarkson unmarked in the slot. Clarkson fired a powerful wrist shot past Smith before he could react. Tigers were then given a power play chance when Jonathan Kirk was given a tripping penalty. The team left it late in the power play before they got any consistent control of the puck but finally made the extra man count with five seconds of the power play left. Clarkson scoring with a slap shot into the bottom corner. But, just as Tigers fans were retaking their seats from celebrating, Hull pulled a goal back through Lubomir Korhon. Hull then levelled the game when Hewitt was given far too much time and space by the Tigers’ defence, allowing him a free shot at goal which went in off Hovell’s glove. The period ended with the teams level at 3-3.

Tigers started the second period with an early power play as Hull’s Sam Towner was called for slashing. But, it would be Hull who would score, whilst short handed. Tigers completely lost their coverage and allowed James Chilcott to find the unmarked Hewitt, who raced through on goal and put the puck past Hovell to give Hull their first lead of the game and complete his hat trick. Pirates then had a glorious chance to increase the lead when Matty Davies was hooked by Warren Tait when clear on goal and Hull were awarded a penalty shot. Davies’ shot was well saved by Hovell. Tigers then responded by levelling the game again. Jason Silverthorn burying a wrist shot into the top corner of the goal to make the score 4-4. Tigers would only be level for just over 30 seconds as Hull struck back when Sonny Karlsson shot past Hovell to make it 5-4 Tigers then gave away a needless penalty when Scott McKenzie cross checked James Archer, in front of the referee. Hull had constant possession for all of the resultant power play and scored when Hewitt blasted a shot from the right circle past Hovell to make it 6-4. Tigers again responded with a goal, Ricky Plant scored with a perfect shot into the top corner to make it 6-5. However, within a minute Hull were two goals ahead again, Karlsson adding his second of the game when Tigers failed to clear the puck from their defensive zone, making the score 7-5. Tigers’ Jed Moreland then gave away an unnecessary penalty when he was called for slashing, giving the already dominant Hull power play unit another chance. Hull’s Lee Bonner scored a minute into the power play to give the Pirates an 8-5 lead at the end of the second period.

Tigers changed net minder at the start of the third period, with Zack Brown replacing Hovell. Telford needed an early goal to get back into the game and were given a power play chance four minutes into the period. Adam Taylor scored with a shot from close range which he lifted over Smith into the net to reduce Tigers’ deficit to 8-6. Despite this, Tigers gifted a goal to Hull ten seconds after the restart. Danny Rose’s attempted clearance was blocked giving Matty Davies a free shot at goal which he dispatched past Brown to increase Hull’s lead to 9-6. Tigers were given another power play chance in the 48th minute after Hull’s Jordan Fisher was called for tripping. The fans were given hope of a comeback when Silverthorn’s shot was tipped past Smith by McKinney to make the score 9-7. Tigers were pushing hard to try and get back into the game and despite a number of close calls could not get any further goals. Hull’s Bobby Chamberlain rounded off the scoring in the 56th minute with a goal from close range to seal a 10-7 victory. Hull’s win takes them level on points with Tigers at the top of the league, with Hull ahead by virtue of the results between the two teams so far this season (Hull going top due to the point they gained in their penalty shoot out loss in the previous game between Tigers and Hull).

Man of the match: Ricky Plant.

After the game coach Tom Watkins said, “I’m not really sure what to say tonight. I’m naturally disappointed to lose and of course we made mistakes to give up the number of goals we did. We got ahead early then gave that lead up to tie the first period 3-3. Hull then took advantage and every time I felt we were coming back when we scored, they then stole the momentum back quickly after. We were never able to keep the momentum to make a difference.  It’s time to refocus, refuel and come back stronger tomorrow.”

Hexagon Telford Tigers 1 return to play at Telford Ice Rink Saturday 23rd February 2019 at 19:00 in the NIHL Moralee Conference against Blackburn Hawks. Hexagon Telford Tigers 2 are next in home action at Telford Ice Rink on Sunday 24th February 2019 at 18:00 in the NIHL Laidler Conference against Blackburn Hawks 2. For details of all future fixtures, check out the Tigers fixture list and www.telfordtigers.net/tickets for ticket information.