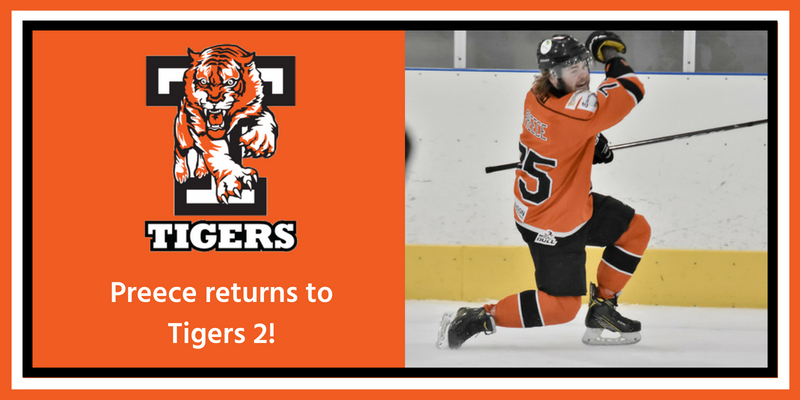 Telford Tigers are pleased to announce another player signing! Defenceman, Liam Preece will pull his second Tigers jersey for upcoming season for Tigers 2.

The 27-year-old has played hockey in Telford since appearing on the roster for Telford Rockets in 2005. Since then, Liam has progressed through Telford Rockets and Titans
before making his debut in a Tigers jersey last season.

Despite playing in defence instead of his preferred position as a forward; Preece has come off what was a great season for Tigers 2, picking up points and displaying quality play on the ice. Tigers 2 player coach Callum Bowley is thrilled to welcome back Liam commenting;

“Liam had a bigger challenge than most players last season as I asked him to play in defence, rather than his preferred position as a forward. Despite this challenge, I think he took it in his stride, never moaned and proved to be a very valuable defencemen.

As a player, he’s very coachable, wants to learn and will do whatever it takes to win which is exactly the type of players you want on your team. He’s integral to our defensive unit and I am sure we haven’t seen the best of him yet.”

“I’m obviously extremely happy with being asked back for another season. Last year was a great opportunity for me stepping up and wearing the Tigers jersey for the first time, learning a lot and gaining great friendships. But now that we’ve had our teething season, I feel this season will be our statement year, going for big targets that I think we’re more than capable of achieving. I’m excited to get started!”

Liam’s #75 own and loan shirts are available to order now for £50 each (Home and Away). Please see the own and loan registration page for more details and to register.