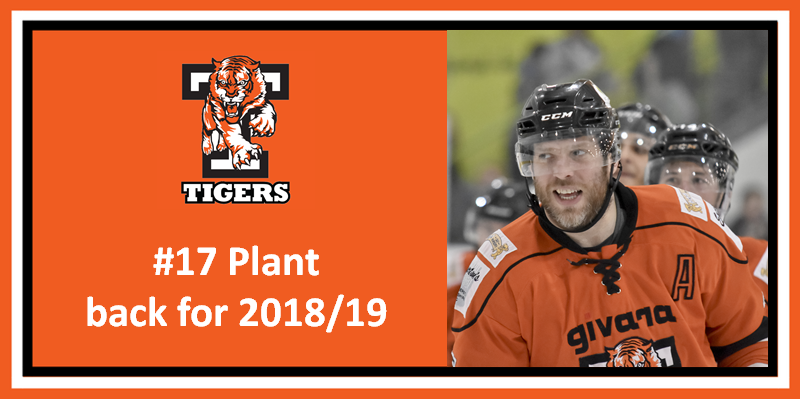 Telford Tigers 1 are pleased to announce that the new season will see the return of six time EPL league winner Ricky Plant, Ricky a vastly experienced forward who signs on with the Tigers for what will be his eight season in Telford in total and his sixth since re-joining from the Guildford Flames midway through the 2013/14 season.

Tom Watkins, General Manager and Head Coach, said “For me, Ricky is still one of the best players in the league and still loves coming to the rink to play and practice, he’s very low maintenance, never has an issue and always puts a shift in. You would never know if Rick is injured, sore or tired, never see him on the physio table getting treatment and rarely misses a practice. Its those attributes that  despite his obvious talent on the ice that is there for all to see. It’s also the other things for me that make him standout,  he’s a great example to our young players in Telford on how to conduct themselves as a player, person and I’m sure at some point in the future (hopefully a few years away yet) we will see the Number 17 shirt hanging in the rafters.”

New for 2018/19 Tigers are offering individual player sponsorship, at £400 including a personalised “special” third jersey with a company name / family name patch, match night announcements, a small advert / logo in the match night programme as well as signed player photo.

See Own & Loan registration page for more details and to register or contact marketing@telfordtigers.net for individual player sponsorship.