Roary out tasting the Telfood delights 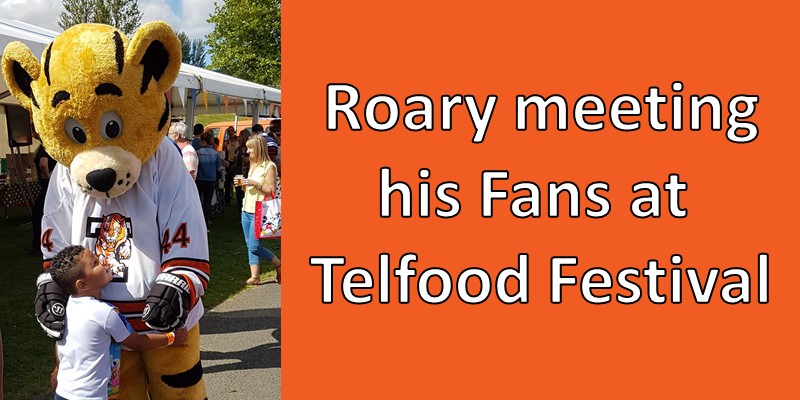 The sun was shining and shorts and T Shirts were the order of the day. The Tigers volunteers arrived just before 9:00 am to set up ready for the crowds later in the day.

The big orange tent was decorated with Ice Hockey equipment and shirts from players past and present and our fantastic volunteers spoke to many budding children and parents who were interested not only in the sport but how they could get started through learn to play.

There were small hockey nets available and the volunteers, including Telford Junior players helped the budding stars of the future use the floorball equipment to try scoring some goals.

Throughout the to day Roary the Tiger made many appearances to the joy of the crowds and especially the younger children, still the most popular mascot in Shropshire he tells me!!!

Sunday the 3rd was the second day of the festival, the weather was a little cooler…….. and wetter, but that did not stop the crowds coming through the turnstiles and visiting the Tigers Tent…. maybe because it was a shelter, but the volunteers made the best of the bad weather to speak to people about the coolest sport on the planet and how to get involved.

Overall a fantastic weekend and the team, including Roary enjoyed meeting the people of Telford and the surrounding areas.