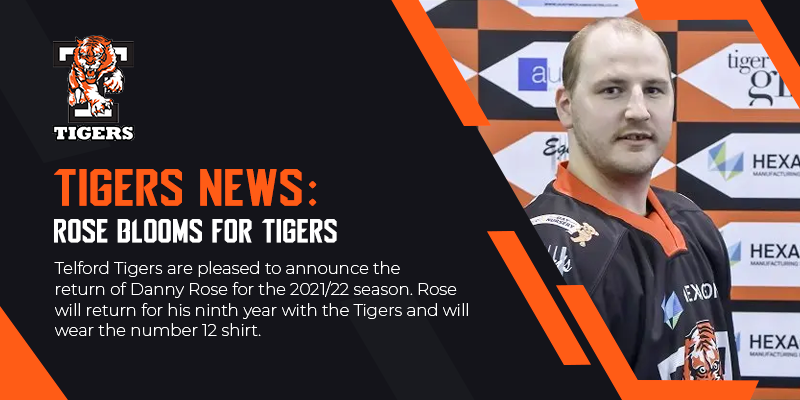 Rose Blooms. Telford Tigers are pleased to announce the return of Danny Rose for the 2021/22 season. Rose will return for his ninth year with the Tigers and will wear the number 12 shirt. Rose proved to be a key defender during the team’s double-winning season and played in every single game during the season.

Danny stated, “I’m really excited to be back in Telford next year. After speaking with Tom and having had the kind of season we had previously, it made my decision extremely easy to come back and sign for Telford again. Obviously winning the double was incredible and it was just a shame the way it ended and that we didn’t get to try for the treble, but this is a new season and I’m looking forward to getting it started and pulling on a Tigers jersey again.”

Tom Watkins, Head Coach and General Manager, said, “Danny has been an integral part of the Tigers’ defensive core for a number of years now, but in the last season we played his game really excelled. He’s always had the tools, but you can see the maturity and composure growing all the time. He is a strong skater and very mobile who uses his skating well to compete at a high level. Previously I have said about Danny that he could really propel his game to the next level, well he did exactly that and more, he is up there with the best in the league in my opinion. He has a tough job to do every night, playing big minutes against other teams’ best players and as a pairing Thomas McKinnon and Danny played a huge role in being a strong shutdown pairing for us. Danny played in every game for us during the double-winning season which is an accomplishment in itself.”

Danny’s own and loan shirts are available to order now for £100 each (Home and Away). Please see the Tigers’ Online Shop for details.