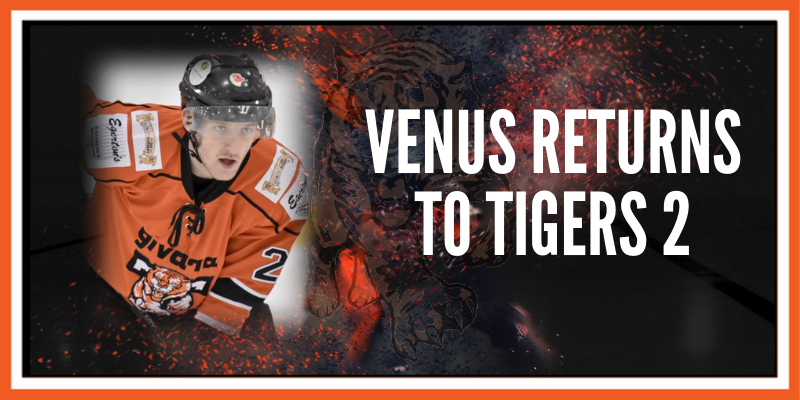 Scott Venus returns to Tigers 2. With the start of the season only a matter of weeks away, the Club are still busy putting together the final touches… Today, Telford Tigers welcome back forward Scott Venus to Tigers 2!

The 26-year-old returns to Tigers 2 following a season at Coventry Blaze NIHL. Scott started his hockey career in Coventry where he Venus has progressed his way through the Coventry Junior system before appearing on the roster for Solihull Barons in 2010.

Venus made his Tigers debut in 2017 where the forward iced with the NIHL 2 side for a season and managed to rack up 84 penalty minutes to his name. Venus then made the move back to Blaze for a season in 2018 where he had a more respectable season with penalty minutes having only been penalised with 8 minutes in 17 games.

“I’ve seen Scott play a few times, his hard working attitude is why I signed him. He’s a player which can lead your third line grinding line, but can also step up to the first two lines when needed. He has good hands and reads the game well, he’ll be in for a good season.”

Venus, who will be returning for his second season with Tigers 2 is equally looking forward to working with Dave and being back with some familiar faces;

“I’m delighted to be re-signing at Telford and can’t wait to get the new season underway! I truly believe that we’re capable of winning the league with the players we have available, both youth and senior and I hope to be a big part of that journey.”

Scott’s own and loan shirts are available to order now for £75 each (Home and Away). Please see the Telford Tigers online shop for more details.