Scotty Mac is back! 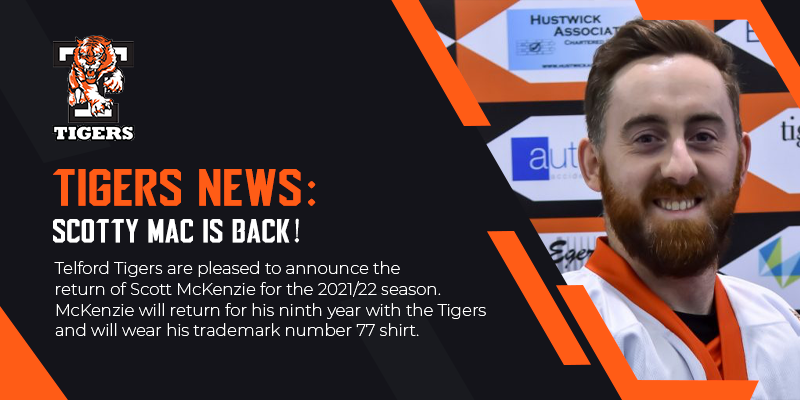 Scotty Mac is back! Telford Tigers are pleased to announce the return of Scott McKenzie for the 2021/22 season. McKenzie will return for his ninth year with the Tigers and will wear his trademark number 77 shirt. McKenzie was the team’s top scorer with 72 points during the double-winning 2019/20 campaign and will be a key player in the roster for next season.

Scott stated, “I’m really excited to get back on the ice in Tigers colours. The best thing about September is being able to have fans back in the building. I felt grateful to be able to play during the Spring Cup and Three Rivers Cup but getting back to some sort of normality is what we all want. Returning to Telford was never in doubt for me. I live in Telford, love playing for the Tigers and know that Tom will be putting together a team capable of competing for trophies and ultimately that is why we play the game, to win silverware. I’m delighted to be back.”

Tom Watkins, Head Coach and General Manager, said, ”Scott’s signing was never in question or doubt. He is another stalwart who has played a huge part in the development of the club in my time and contributed a huge amount to the success story of the Tigers. He’s played over 350 games and has over 500 points in a Tigers shirt, but more importantly, has contributed to 5 trophies with this club. His on-ice performances are there for all to see, he contributes in every department: 5 on 5, face-offs, power play and penalty kill, penalty shots, 3 on 3, scores big goals, is an accomplished shot blocker and keeps getting better and better each season. His attitude and character are first class, he has a love for the game which is one thing but his passion for the club, for the Telford Tigers is unquestionable. Scott is a leader on and off the ice, shares my vision for the team and brings the best out of his teammates. Scott is involved in all the key moments and if you’re down by one you lean on Scott to make something happen or if you’re up by one you look to Scott to help shut the game down.”

Telford Tigers would like to thank GTS Couriers for their continued support and agreeing to be Scott’s personal sponsor for the forthcoming season.

Scott’s own and loan shirts are available to order now for £100 each (Home and Away). Please see the Tigers’ Online Shop for details.