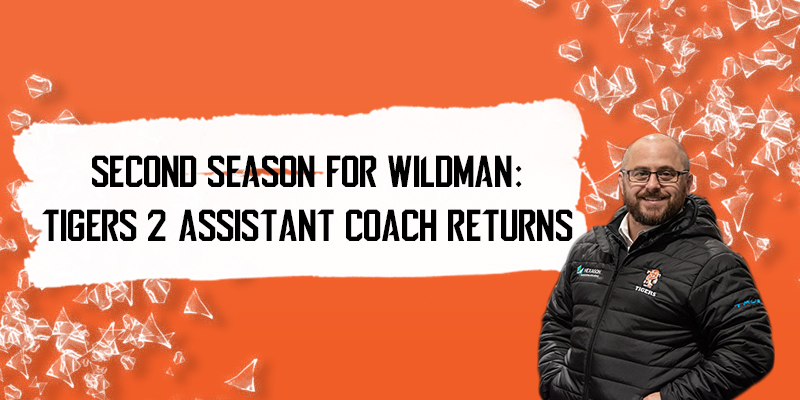 Telford Tigers are delighted to confirm that Dougie Wildman will be returning to the Club for his second season as Telford Tigers 2 Assistant Coach.

Wildman has spent several years playing recreational hockey out of Telford as well as gaining a respectable level of coaching experience. In 2018, Doug was appointed as Head Coach of the newly established recreational team, Shropshire Huskies.

This upcoming season will see Doug work alongside Tigers 2 coach Scott McKenzie for the first time. The coaching duo will work together directing and delivering coaching during practice sessions whilst Doug will take on the role of bench coach for all games.

Wildman, who has followed Telford Tigers since developing through the Telford junior system himself is thrilled to be making a return commenting;

“I’m very honoured to have been selected for the assistant coach position again at a Club which I followed and supported all my life, as well as growing up through the Telford junior system many moons ago.

Telford Tigers is very special to me being a local lad and I have been in the Telford rink since 1986.

I’m very proud to be involved more in a coaching role with Tigers 2 and looking forward to working closely with Scott, Tom and all the coaching staff at the Club.”

“I spent last season as assistant to Dave (Ces) who helped me progress and my time spent with the Team was great.

This is a new chapter for me working with Scott and after interviewing with both Head Coach Tom and Chairman Mike, I am equally as excited and positive about the future plans and direction that they are pushing the Club and teams in.”

After the announcement of the national lockdown in March this year, it sadly meant that hockey was put on hold and never continued for the remainder of the season; but Doug is keen to get going again…

“In light of the current situation with Covid-19 and the disruption of Hockey I’m chomping at the bit to get going and continue this journey.

All at Telford Tigers are working hard behind the scenes to ensure we have the best bunch of players available for this upcoming season as and when we are given the green light to go.

Any players wishing to express their interest in signing for Telford Tigers 2 should contact us ASAP.

I look forward to seeing you all at the rink cheering Telford on.”

Mike Washburn, Chairman of Telford Tigers is pleased to welcome Dougie back for the forthcoming season commenting;

“I’ve only come to know Dougie over the course of the last season. In that short time, I have been singularly impressed by his attention to detail, cool approach to our bench management and his clear understanding of what motivates young sportsmen. But for me, the stand out quality I observed in Dougie was his insatiable desire to learn and to develop, not only his team but himself.

I am so pleased that he has taken the position of Assistant Coach with Scott, and Tom – I fully believe that he will soak up everything he is offered by way learning, and I’ve no doubt it will then be deployed in gameplay. A great hire now and also one to watch for the future.  A super complement to our coaching team.”

Scott and Doug are now looking for player recruits head of the new season for Telford Tigers 2. If you’re interested, please get in touch and email – coach@telfordtigers.net