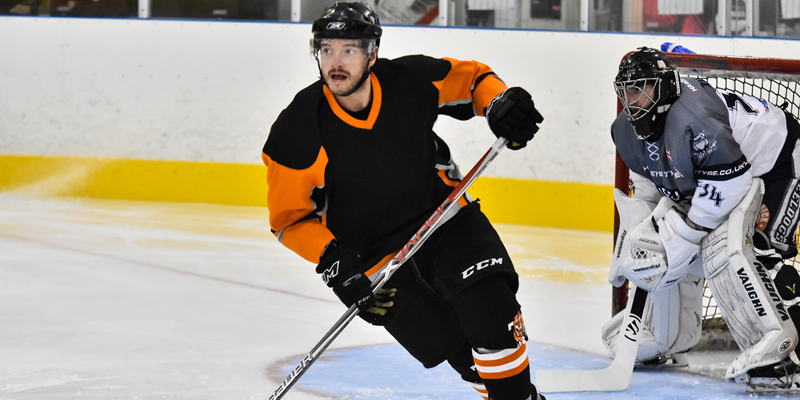 Telford Tigers 1 took on Sheffield Steeldogs at Ice Sheffield on Saturday night in an NIHL Division 1 North game. Top of the table Tigers came into the game looking to build on their recent 3-0 league victory over Solway Sharks. Tigers iced new signing Scott McKenzie in his first game since returning to the Tigers earlier this week but were without Jonathan Weaver, Dale White and Jason Silverthorn. Tigers also included U18 net minder Ryan Lewis in the squad, replacing the now retired Sam Hewitt.

The 1st period was an even, scrappy one, with both teams not really coming close to scoring. Sheffield’s ex Tigers player Milan Kolena came closest in the 5th minute, when his rising wrist shot was pushed onto the cross bar by net minder Dennis Bell. Tigers had pressure towards the end of the period and Joe Miller and McKenzie both had half chances, but could not finish. The period ended with the teams tied at 0-0.

The opening goal was scored in the 22nd minute by Adrian Palak who finished a Sheffield 3 on 1 breakaway with a wrist shot past Bell. Tigers responded well and equalised within 2 minutes when McKenzie showed superb skills to slide the puck home from a tight angle to score his first goal in his second spell with the Tigers. Tigers were firmly on top and were unlucky when Corey Goodison’s blue line slap shot hit the bar. Tigers then took a deserved lead when Jack Watkins’ powerful shot deceived the Sheffield net minder to hand the Tigers a 2-1 lead at the break.

The 3rd period started with both teams exchanging penalties but no addition to the scoresheet until the 51st minute when, despite some heroics from Bell making 3 terrific saves in a row, Palak back handed a rebound into the net to draw the teams level at 2-2. Tigers pushed for the winner but it was Sheffield who would take the victory. Bell could do nothing about the final goal of the game in the 55th minute. Bell saved the first shot but was unable to clear the second which left James Spurr on hand to score on the rebound. Tigers played the last minute with an extra attacker, having pulled net minder Bell but could not score to extend the game.

Man of the match – Kim Miettinen.

After the game coach Tom Watkins said, “This was a tough one to lose, our defence logged a lot of minutes and moved the puck well, but Sheffield picked up a couple of rebounds to to draw level and take the lead. We pushed hard and knocked on the door but couldn’t score.” Watkins added, “Overall I was pleased with the performance but naturally disappointed to not come out of the game with the points.”

Telford Tigers 1 are next at home on Sunday 5th November against Basingstoke Bison with a 6pm face off. For more information and ticket details go to www.telfordtigers.net.