Shoot Out Despair for Tigers 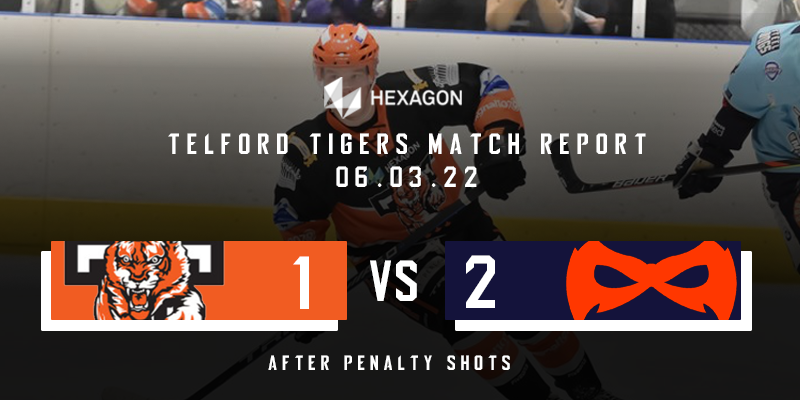 Shoot Out Despair for Tigers. Hexagon Telford Tigers returned to home ice after a terrific win in Leeds against the Knights and hoping to address their poor recent home form. Having lost their last three home league games, Telford would have expected to see their lead at the top reduced but three successive away wins, coupled with nearest rivals Swindon’s loss of form meant Telford started the game seven points clear at the top and playing their game in hand over Swindon to extend the lead further.

Jack Watkins, Fin Howells and Ross Connolly were the only absentees from the lineup.

The first period ended goalless and both teams struggled to create any clear opportunities. Tigers had the best of the chances with Bayley Harewood and Austin Mitchell-King both being denied on breakaways by Jordan Marr in the Phantoms’ goal. Vladimir Luka hit a hat trick in the previous game and went close to scoring with a brilliant move to create space and then sent a wrist shot off the crossbar.

Tigers took the lead in the twenty-fifth minute. Jake Price sent a pass from the Peterborough blue line towards goal where Jason Silverthorn was perfectly placed to deflect the puck past Marr to open the scoring. Tigers continued to pressure the Phantoms’ goal with Mitchell-King going close again and a Danny Rose breakaway was stopped by Marr.  Brad Day was also called on to make a point-blank save from Petr Stepanek.  The final action of the period saw Tigers’ Jonathan Weaver hit the post.

Peterborough pushed hard for the equaliser in the third period and Day had to pull off a couple of big saves to keep Tigers ahead. Eventually, the Phantoms’ pressure paid off when Nathan Salem hit a low shot past Day with just three minutes left on the clock. With no further scoring, the game went to overtime.

Tigers had the better of the extra five minutes with Mitchell-King going close and Luka hitting the post then seeing his deflected shot agonisingly miss by inches. The game would be decided by a penalty shoot-out.

Tigers gain a point in the standings and, with their victory over Bees, Milton Keynes climb to second place in the league, seven points behind Telford with eight games left.

After the game Head Coach Tom Watkins, commented, “I am disappointed that we didn’t pick up two points after leading the game for so long, then having a power play in overtime which was a great opportunity for us to win the game. A point is a step forward but we need to win our home games and have dropped 5 points at home in recent weeks. Today was a grind, it was tough to create many chances, both teams doing a good job defensively with both teams almost cancelling each other out at times but leading by a goal, I felt we should have taken advantage of some of the chances to give ourselves a cushion.”