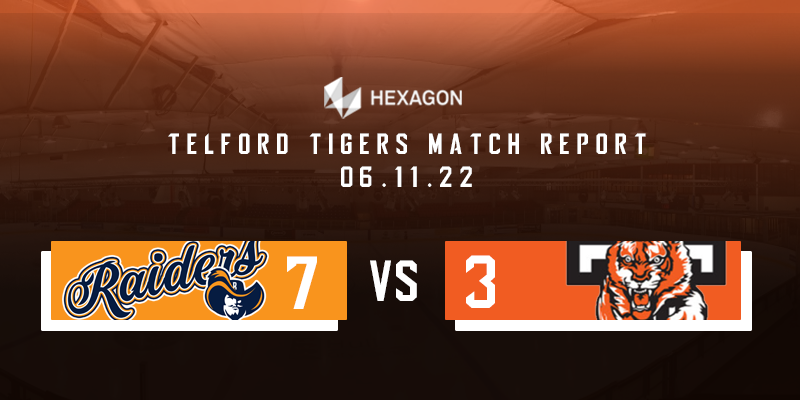 Short Benched Tigers Suffer Heavy Defeat. Hexagon Telford Tigers took their longest road trip of the season to Romford to take on the Raiders after beating Hull the previous evening. Tigers were short benched after losing Scott McKenzie, Nick Oliver and Rhodes Mitchell-King in the previous game. Added to the already absent Deakan Fielder, Jonathan Weaver and Jack Watkins, Tigers started the game with an uphill battle against a team that had beaten them in their previous meeting.

Tigers gave a debut to promising youngster Louis Molyneux who stepped up to the National League for the first time.

A disappointing first period saw Tigers caught out numerous times defensively. Five minutes into the game Telford were making a line change and this allowed Matt Gomercic to skate in unchallenged and shoot past Brad Day.  Raiders added two goals at the end of the period to take control of the game. Tjay Anderson tapped in from close range and then Adam Laishram beat Day with a wrist shot to give Raiders a huge advantage.

Tigers were given hope in the opening minute of the second period. Jason Silverthorn – who was playing in defense – sent Bayley Harwood clear to score and get the Tigers on the scoreboard.

Celebrations were short lived though and within twenty seconds Raiders had restored the three goal lead. Gomercic scoring his second of the night with a tap in. Telford then completely fell apart conceding a further three goals. Mikey Power scored a power play goal with a slap shot from long distance and was followed by goals from Aaron Connolly and Brandon Ayliffe with the Telford defensive giving Day no support.

Despite the poor performance and disappointing defending, there was one bright moment for the Tigers’ fans to cheer. Molyneux scored his first ever goal at senior level. Bayley Harewood’s shot was blocked by a Raiders’ defender but the puck fell nicely for Molyneux to control it and lift it over Ethan James to give Telford a consolation goal.

Raiders were never really under too much pressure in the third period but Tigers added a further consolation goal in the final minute of the game when Tom Byrne and Molyneux combined to set up Lucas Price to score from close range.

Tigers fell to a disappointing defeat and will be hoping some of their injured players will return soon.

Man of the match: Louis Molyneux.

After the game Head Coach Tom Watkins, commented, “It has been a long day, a tough day with players unavailable and several players carrying serious injuries and it was bit of a jumble sale throwing lines together at times.

We lost our way through the second period but I was very pleased with how we responded in the third period. Yes, the game was over but as a group, as a team we played the right way which is important. It was a shame about the result, but a great night for young Louis Molyneux – scoring a goal, an assist and getting man of match.”