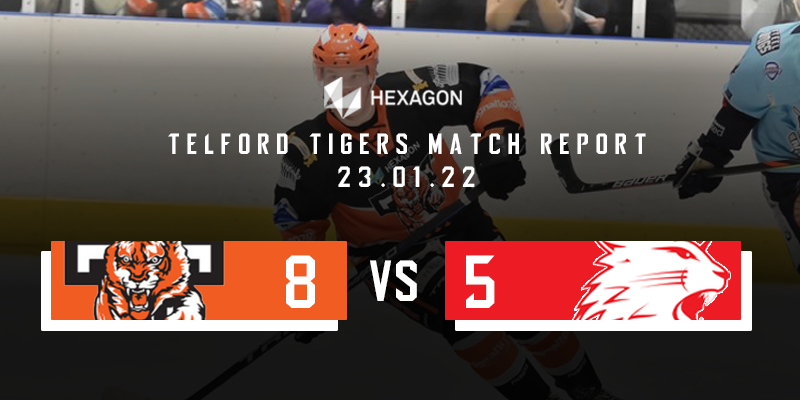 Super Scotty Fires Tigers to the Top. Hexagon Telford Tigers returned to home ice for the second of back-to-back games with title rivals Swindon Wildcats. Tigers had won the previous day after coming back from being two goals behind to win.  A win that saw Telford return to the top spot in the league. With only Jack Watkins and Corey Goodison missing, Tigers were able to ice an almost full roster.

Tigers started the game in perfect fashion, scoring on the first shift of the game. Ricky Plant showed terrific skill to retain possession of the puck whilst under pressure behind the Swindon goal and sent the puck in on goal.  The puck hit Swindon netminder Renny Marr’s pads and rebounded perfectly for Bayley Harewood to score from close range with just twenty-three seconds of the game gone. Tigers were dominant for the opening five minutes and when Swindon player-coach Aaron Nell was called for a cross-check they were presented with a power play. Plant once again showed poise with the puck and entered the offensive zone skated in on goal and was tripped – although the officials didn’t call a penalty – the puck fell perfectly for Jason Silverthorn to slam home for Tigers’ second goal. Swindon recovered from their slow start and forced a couple of good saves from Brad Day in the Tigers’ goal. Vladimir Luka then forced a stunning save from Marr with a backhanded shot that caught Marr going the wrong way but he reached back with his stick and deflected the puck away from the net, saving a certain goal.

As the period ended, Tigers conceded a disappointing goal. Nick Oliver turned the puck over behind the goal, allowing Nell to skate in on goal unopposed and beat Day with a well-placed wrist shot.

Tigers conceded early in the second period and were guilty of not clearing their zone. Luka turned the puck over at centre ice, allowing Tomas Malasinski to send Nell in on goal unopposed and beat Day over his shoulder to level the game.

Tigers responded to the concession of the goal in the best way, by retaking the lead within two minutes. Danny Rose sent the puck to Fin Howells who battled hard to retain possession and then shot low past Marr from a tight angle.  Shortly after Tigers added a fourth goal. Once again it was the combination of Plant and Silverthorn that created the goal. Tigers had a 2-on-1 breakaway when Harewood was taken down at centre ice – but again the penalty was not called – but this put a Swindon defender out of position and allowed Silverthorn to skate in on goal, send a cross-ice pass to Plant who immediately sent it back to Silverthorn who hammered it past Marr.

Tigers started the third period facing an extended Swindon 5-on-3 power play after Austin Mitchell-King and Jason Silverthorn were awarded penalties at the end of the second period.

Despite the two-man advantage for Swindon, it would be Tigers that would score. Scott McKenzie won the puck at centre ice and shrugged off two Swindon defenders, skated in on goal and hit a stunning wrist shot into the top corner of the net giving Marr no chance. Swindon managed a power-play goal to reduce the lead, with Emil Svec beating Day short side to give Swindon their third goal. Swindon then reduced the deficit further with a Reed Sayers goal after a scramble in front of Day. With Swindon firmly back in the game McKenzie struck twice in quick succession.   He outmuscled the Swindon defence again and beat Marr with a fierce wrist shot. Then less than thirty seconds later, Vladimir Luka deflected the puck to McKenzie in the slot and his shot went through Marr to complete a fabulous hat trick and put Tigers back in charge.

After the seventh goal, Swindon changed netminders with Dean Skinns replacing Marr. Swindon hit back again with ten minutes to go after Thomas McKinnon had been given a tripping penalty. Chris Jones finishing off a Malasinski pass. However, Tigers had the final say on the score sheet with a goal to seal the contest. Jack Hopkins with a terrific pass to send Luka clear on goal and the Czech forward buried a shot past Skinns to give Tigers the eighth goal.

The win sees Tigers claim the top spot in the league standings two points ahead of Swindon with two games in hand.

After the game Head Coach Tom Watkins, commented, “We had a great crowd and an amazing atmosphere tonight. Everyone here witnessed a very exciting game of hockey between two of the top teams in the league, thankfully with the right result for us. Both teams played very hard and laid it all on the line. We had a very good start, but I have got to mention their netminder,  Renny Marr. He pulled off three amazing saves in the first period, point-blank desperation saves where our players are already celebrating a goal and somehow he managed to make the save. We did a good job of controlling the momentum during the game. Swindon kept pushing and kept up the pressure all night but every time they scored, we answered right back which kept us on the front foot. What a great third period for Scott (McKenzie). Three huge goals and I think it was on three straight shifts, but to grab one when we were two men shorthanded is not something you see very often and that gave us the cushion we needed. It has been a very good weekend against our closest rivals.”