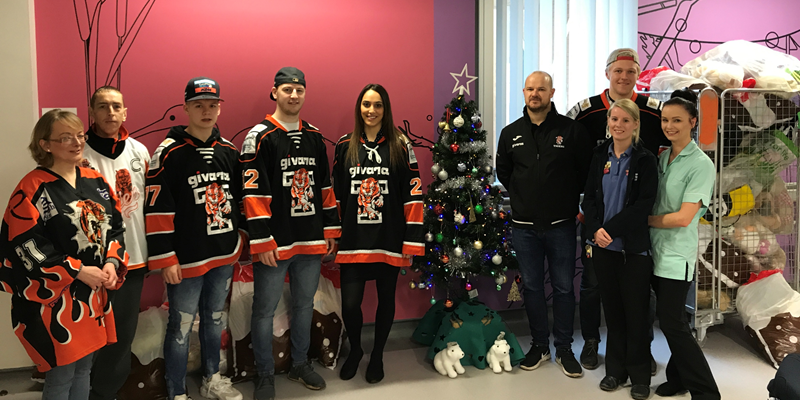 The Telford Tigers 2017 Teddy Toss has been declared another “massive success”.  Hundreds of fans launched soft toys onto the ice during Saturdays game against Blackburn Hawks 2 and Sundays game against Nottingham Lions. Fans were invited to throw new cuddly toys, onto the ice at the Telford Ice Rink after the first Tigers goals in their respective matches.

A total of 268 teddy bears have been collected after fans “aired the bears” when Telford Tigers 1 and 2 scored their first goals in their respective games. Tigers 1 winning 11-2 against Nottingham and Tigers 2 winning 18-2 against Blackburn.

Following the weekend games a few of the Telford Tigers players, volunteers and General Manager Tom Watkins dropped into the Children’s ward of the Princess Royal Hospital to meet the sick children and distribute teddies that were collected from the annual Teddy Toss event.

The star of the show was special guest Roary the Tiger who also made an appearance, bringing laughter and lots of smiles to the children whilst the teddy bears were handed out.

The annual Teddy Toss, was again organised by Telford Tigers volunteer Samantha Middleton who stated “The event has been a another fantastic success, we love doing something special for the local hospital children at this time of year, it brightens up what otherwise can be a very stressful time both for the children and their parents”

Head Coach, Tom Watkins said “After that first goals were scored at the weekend it was great to see so many teddies thrown onto the ice. It’s a very humbling experience to visit the hospital and see the faces of the children when handing out the teddies. I would like to personally thank the fans and volunteers for making this possible.”

Tigers 1 next game is at home at Telford Ice Rink on Saturday 23rd December against Solihull Barons.  Face off at 17:30, Christmas jumpers optional.

Roary and the gang at the PRH handing out teddies.