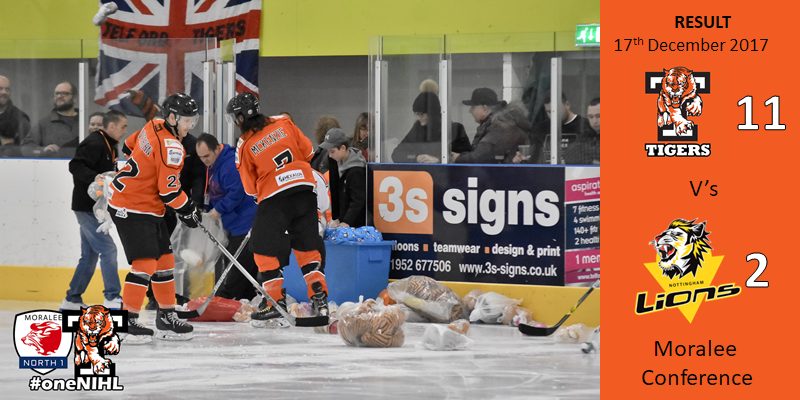 Telford Tigers 1 returned to NIHL Moralee Division league action on Sunday night against Nottingham Lions at Telford Ice Rink. After two weekends of cup action, Tigers had dropped to third place in the league and trailed leaders Sheffield Steeldogs by 5 points, albeit Tigers had 2 games in hand.

The game was designated as the Tigers 1 annual Teddy Toss. When Tigers scored their first goal, fans were to throw teddy bears onto the ice, with all teddies being donated to local children’s hospital wards.

The goal that saw the teddies thrown was scored by Dale White after 1 minute and 4 seconds when he slid the puck home from close range after Joe Miller’s initial shot was saved by Nottingham net minder Thomas Hovell. Tigers scored their 2nd goal in the 4th minute when Miller scored from Adam Taylor’s pass. The 3rd goal was scored just 30 seconds later when Weaver received a great pass from Tom Watkins and fired home with a perfect wrist shot. The 4th goal arrived in the 10th minute and was scored by ex Nottingham player Warren Tait who tapped in after Watkins’ shot was only partially saved. The 5th goal was scored in the 16th minute when Danny Rose’s shot was tipped by Jason Silverthorn, with Hovell saving the shot but unable to stop Corey Goodison from scoring from the rebound. In the 18th minute, Tigers gained a 6th goal when Weaver unleashed a fierce slap shot from the blue line that flew into the bottom corner leaving Hovell no chance. Nottingham got on the score sheet in the final seconds of the period when Cameron Pywell scored to break Armstrong’s shut out. Tigers ended the period ahead 6-1.

The 2nd period saw Tigers constantly pressuring the Nottingham goal and they hit the post twice in quick succession through Goodison and Scott McKenzie before they scored their 7th goal in the 35th minute whilst on a power play.  Silverthorn netting from Plant’s pass. Less than a minute later Tigers got their 8th goal, Adam Jones firing in from long range with a precise shot passed Hovell. Tigers ended the period 8-1 ahead.

The final period saw Nottingham score their second goal through Joe Humphries in the 48th minute. Tigers struck back with their 9th goal in the 55th minute, Tait scoring his 2nd goal of the night whilst Tigers had a 5 on 3 power play. McKenzie then scored the 10th goal from a tight angle and Silverthorn rounded off the scoring in the 57th minute to give the Tigers their 11th goal.

After the game coach Tom Watkins said, “What can you say about tonight’s game, we got the first goal nice and early and from there totally dominated the rest of the game. After that first goal it was great to see so many teddies thrown onto the ice. I would like to thank all the fans that supported the clubs’ teddy bear toss this weekend. To have around 250 teddies is fantastic, they are all going to a great cause and it was a pleasure to welcome the staff from the Princess Royal Children’s Ward this evening.

It was also extremely pleasing to see so many fans stay and watch the Santa v Elf’s charity game. It was a very rewarding evening for hockey in Telford in general.”