Telford Tigers 2 ace it again with another win! 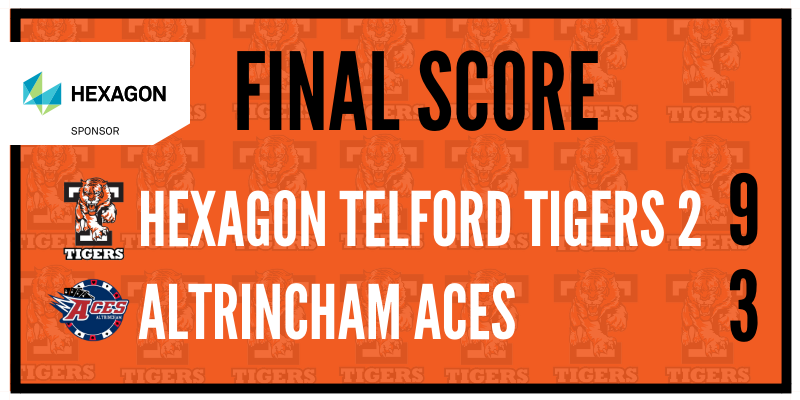 The game between the Tigers and Aces started off with a #75 Liam Preece on the receiving end of a boarding penalty which resulted in a fight between #96 Charlie Hammerton and Aces #28 Jakub Pavlicek.  The Tigers were able to capitalise from the powerplay and scored the first goal of the night when #27 Callum Griffin found the back of the net.

The game was full of penalties on both sides, Aces #19 Cameron Gibson was ejected from the game after his second 10-minute misconduct penalty and the Tigers lost #13 Connor Gordon the same way in the third period. Not to forget… the Aces bench penalty for abuse of an Official showed that Referee Andrew Jarvie was in no mood to take any nonsense from either side.

The Third period saw #3 Ollie Johnson take his place between the pipes and the Aces were able to put two past him however, two even handed goals from #77 Daniel Thomason and #40 Ben Washburn and a shorthanded goal from #89 Lubomir Plandor sealed the Tigers win ensuring a comeback was out of reach for the Aces with a 9-3 win.

Player Coach Callum Bowley had this to say about his team’s performance:

“It was great to see a lot of secondary scoring tonight and see guys sticking up for one another. I thought defensively in patches of the game we lost concentration and wanted to do too much on the puck, which resulted in providing Altringham with top many primary scoring opportunities, but once we simplified our play we were much more effective. It’s another win, another two points so we’ll take that and keep building as a team”.