Telford Tigers 2 are victorious in a table topping clash against Widnes Wild! 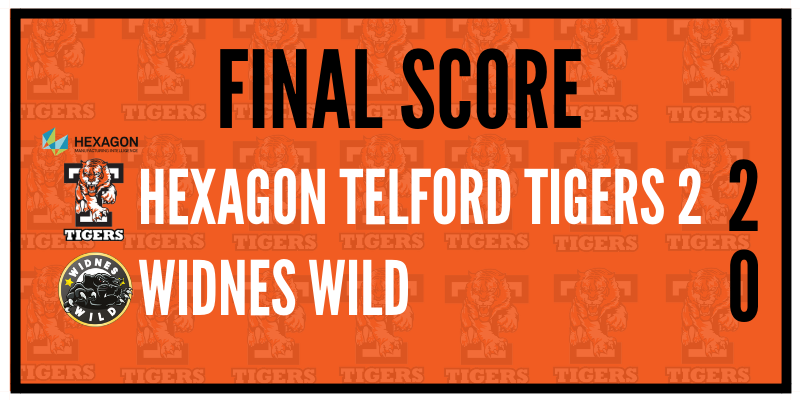 Wow… What a game!

The Tigers Fans were treated to a hard hitting, hard fought game of end to end hockey when the Tigers took on Widnes Wild on the last Saturday of September.

The first period was action packed end to end hockey, with both teams working hard to score, The Tigers were given an early chance when the Wild tripped #40 Ben Washburn as he approached the Wilds net, giving a penalty shot one minute into the game, #96 Charlie Hammerton took the penalty and missed the opportunity to put the Tigers one goal up.  The first period ended with the score board at nil for both teams and the Tigers out shooting the Wild by 16 shots to 12.

The second period saw both teams using their power play and penalty kill lines constantly in the first half of the period but still neither team were able to score, the Wild had a couple of unlucky dinks on the pipes but Tigers keeper #41 Zac Brown, kept a cool head and the puck out of the back of the net. The period ended on a nil all draw with the Tigers once again outshooting the Wild 16 shots to 14.

Period Three saw both teams trying hard for a goal, youngster #36 Henry Adams scored to put the Tigers in front after 45 minutes of play.  #4 Karol Jets scored the second for the Tigers ten minutes later. The third period saw the Tigers keeping up the pressure, once again outshooting the Wild and pressuring for a third goal.  With 14 seconds to go scuffles at the half way line saw roughing penalties for both sides, with an unsportsmanlike behaviour penalty thrown in for the Wild.

Tigers Keeper # 41 Zack Brown kept a clean sheet with a hard earned shut out which bagged him a well-deserved Man of the Match.

Coach Callum Bowley had this to say about the Teams Performance tonight:

“I was really pleased with the way the guys dug deep and battled all night against a strong Widnes team. I don’t think it was our best game in terms of doing the little things right, as I thought we took some silly penalties when we didn’t necessarily have to, and I thought we were slow in transitioning up ice. Having said that, the most important thing is we got the win and it’s a huge boost for us this early in the season. I have to give credit as well to both goalies, I thought both of them were outstanding and made the game go all the way to the wire. We’ll be looking to carry this momentum into the game against Deeside and put in a performance.”

After hearing a noisy and supportive crowd throughout the game, some dressing room celebrations were certainly in order…  Here’s a sneaky peak at the tremendous post match celebrations from the Telford Tigers 2 team.

This is what a hard fought win means to the boys! ???