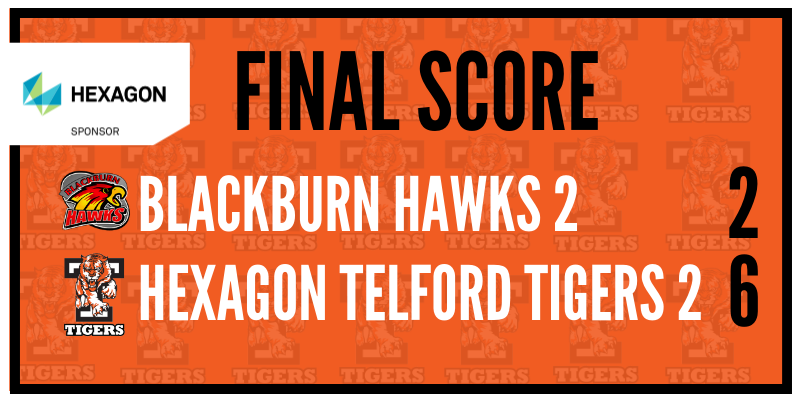 This Sunday saw Telford Tigers 2 ice for the third time in one weekend after playing a friendly game against the U17’s Midlands team on Friday evening, followed by a home fixture against Altrincham Aces on the Saturday before finally travelling up to Blackburn to face Blackburn Hawks 2 on Sunday.

With very tired legs and a short bench due to injuries, bans and work commitments; Tigers 2 knew the final battle of the weekend would be the hardest. Tigers 2 had only 12 players available to play which included both net-minders which left player coach Callum Bowley having to strategically re-position his players in a bid to win the game. The list of players unavailable to play really was painful…

It was a slower burner for both teams in the first period, with plenty of on target shots but no goals. The short benched Tigers were putting in long and hard fought shifts which eventually started to pay off when Hawks’ found themselves a man down as a result of a 2-minute slashing penalty. This was shortly followed by the first powerplay goal of the game for Telford Tigers when #40 Ben Washburn found the back of the net at 7:29 with assists from Griffin and Jolly. The remainder of the period was looking pretty bleak until Tigers’ youngster Jamie Viccars, who made his Tigers debut only the previous day; fired a rocket of a shot past the Hawks netminder making it 2-nil Tigers! This was quickly followed by a third Tigers goal seconds later, scored by acting Captain, #27 Callum Griffin at 19:38. The first period ended in the Tigers’ favour 3 goals to nil.

The second period began, and once again it was a slow start on the goals front… The game hit the half way mark and #40 Ben Washburn promptly made his mark again with his second goal of the game at 32:38, assisted by Jolly – taking the Tigers to a 4 goal lead. Despite the goal deficit, the Hawks were eager to bite back which they did when they got their first goal of the game at 36:05. Determined as ever; the visiting team were hungry for more goals; and more goals they had when Jordan Jolly found the perfect opportunity to set up an assist for Ben Washburn’s hat-trick goal of the game with only 1 second to spare until the end of the second period. The period ended with a 4 goal lead to Tigers 2.

Both teams returned to the ice for the third and final period and tired legs really began to show… Hawks 2 found the back of the Tigers net only 1 minute 32 seconds into the period but that wasn’t the last of the goals. A 2 minute minor roughing penalty for Hawks’ Hoyle treated the Tigers to another powerplay opportunity. Still hungry after his first goal, Callum Griffin grabbed his second goal of the game at 57:04, assisted by Preece and Bowley.

The final buzzer sounded which concluded the last encounter between Tigers 2 and Hawks 2 for the season. With only 10 outfield players, and playing 3 games over the weekend; Tigers 2 gave an brilliant performance which everyone was proud of and thoroughly deserved that 4 point weekend! Not only did Tigers 2 have an incredible game, but credit must be given to Blackburn Hawks 2 who have battled for the entire season, providing the league with plenty of competitive games. This game saw 62 shots in total on Hawks netminder, Samantha Bolwell – a truly outstanding performance.

Coach Callum Bowley was thrilled with the result commenting;

“It was a brilliant performance. I couldn’t fault one player as they all worked hard for one another and played very smart despite having an awful lot of senior players not icing due to injuries and work commitments. It was great to see Jamie pick up his first senior goal, see the forward lines create some really good offence and I have to say Howells played with a lot of maturity in defence, so all in all a very pleasing road win with a very short bench.”

Telford Tigers 2 have now concluded their home games for the season now and only have 2 league games remaining this season before that all important play-off weekend.