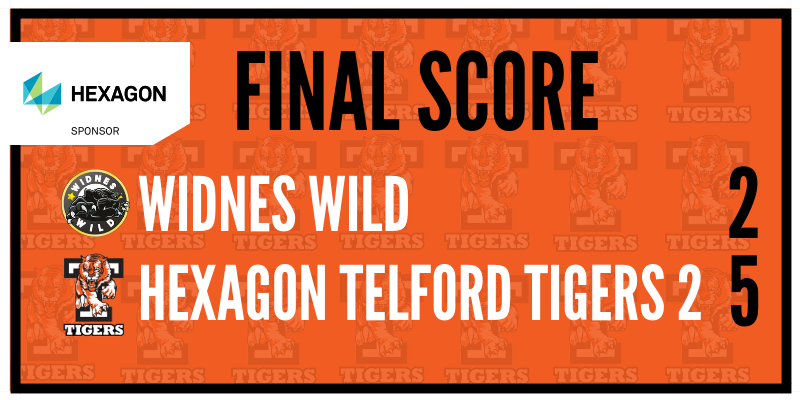 This weekend, Telford Tigers 2 faced one of the most important games of their 2019 Laidler campaign as they travelled to Widnes to face the current league leaders, Widnes Wild.

After snatching up 4 points last weekend at home against Coventry Blaze NIHL and away in Hull against the Jets, Tigers 2 were looking for another 2 points to close the gap between first and second place and of course, gain the advantage over the Wild after winning 2 of the 3 previous encounters…

The puck dropped for the first period and it was end to end hockey from the word go! A fast paced and physical start to the game for both sides made it difficult for either team to score however, Tigers managed to snap up the first powerplay goal of the game at 13:48, scored by #36 Henry Adams – his second goal in two games for the Telford youngster.

Time pressed on, and both net minders were on form with plenty of on target shots until Wild’s Croyle let one slip through the net. A delayed penalty goal from #72 Bowley and assisted by Filip Supa and Finley Howells at 19:37 saw the visiting team take a two goal lead into the second period.

There was plenty more action in the second period as the Tigers started things off the right way once again… Slick passes from Bowley and Washburn set up the perfect third goal opportunity which #81 Filip Supa finished off nicely at 20:24; taking the Tigers to a 3 goal lead. The Wild weren’t backing down, and their hard work paid off when they scored their first goal of the game at 23:32. Both teams pressed on to find more goals, with grit and determination, but Wild’s Ross Jordan found his game ending prematurely when he landed himself a 5+game penalty for kneeing, taking down Tigers’ Supa with him at 27:33.

With the half way mark of the game gone, the game was still all to play for! It wasn’t long again until the Wild found themselves another goal down at 33:40 when #59 Jordan Jolly found the back of the Wild net, assisted by Supa and Price. The period ended yet again in the Tigers favour 4 goals to 1…

With still another period to go, the league leaders still had time to turn the game around. The puck dropped for the final period, and once again it was end to end hockey with all of the players putting in their best shifts. 4 minutes into the third period, and Tigers forward #40 Ben Washburn found himself digging the puck out of the corner which he then fed to #81 Filip Supa who found the back of the Wild net at 46:55 for the 5th Tigers goal of the game.

The action still wasn’t over… With less than 2 minutes left in the game, Tigers’ #13 Gordon and Wild’s #15 Kemp bagged themselves 2 minute minor penalties after an roughing encounter with one another in front of the Tigers net. Whilst both teams were a man short, Wild still managed to come out on top when they scored their second goal of the game at 59:29, meaning they had 31 seconds to score 3 goals for the game to go to over time…

Time was precious and for the final 30 seconds for both teams and the travelling Telford Tigers fans were up on their feet, cheering their team to victory. The final buzzer went and there was uproar from the Tigers bench as they just bagged their third victory over Widnes Wild!

“I thought that was one our strongest performances this season. Widnes is a hard place to go and let’s not forget they are league leaders and hadn’t lost a league game all season in their own rink, so to pick up a win the way we did was fantastic. We were good in possession of the puck, I thought we transitioned up ice with speed very well and we created a lot of good offence which is needed to win games. There is a growing confidence amongst the players which is great to see and we now need to push on and keep getting better week in week out.”

Telford Tigers 2 will next be at home on Sunday 24th February where they will welcome Blackburn Hawks 2 to Telford Ice Rink, in their penultimate home game of the season! Tickets are available to purchase online now!