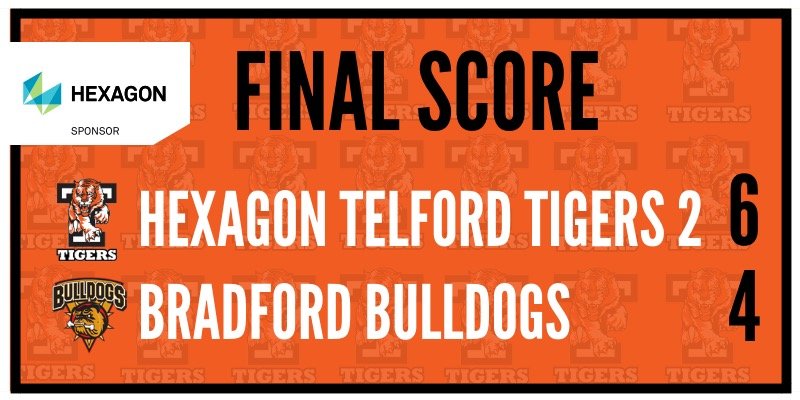 With the Bulldogs sitting mid-table, the Shropshire side were looking to snatch up the 2 points to secure their top third of the table spot.

The puck dropped for the first period and both sides were hungry for the first goal of the game. Tigers’ #18 Hustwick was the first to be penalised for a minor penalty… a delay of the game penalty provided the visiting team with the perfect powerplay opportunity but they were unable to capitalise on it. Both teams pressed on and Tigers 2 finally had the advantage with the first evenhanded goal of the game scored by #94 James Smith, assisted by Bowley and Hustwick. The Bulldogs didn’t take long to respond with an equalising goal in the 18th minute of the period. The first period ended with one goal apiece…

The second period began and it was Tigers 2 who took the lead once again with a one timer from player coach Callum Bowley into the right top corner of the Bulldogs’ net! This was then quickly followed by a string of goals from Griffin, Supa and another from Bowley! The period ended heavily in the Tigers’ favour with a solid 4 goal lead.

The third and final period was a mixed one compared to the previous two periods. Tigers’ newbie Filip Supa managed to bag another goal within 4 minutes of the puck dropping for third; gaining a 5 goal lead which the team managed to maintain until the final 2 minutes of the game. A late hit penalty for Tigers’ Keyes allowed the Bulldogs to take advantage of the powerplay and go 2 goals up; shortly followed by a third goal 20 seconds later and a fourth goal at 59:42! With less than 20 seconds left on the clock, Tigers 2 needed to pull out all of the stops to avoid facing overtime once again! The final buzzer sounded and Tigers 2 managed to take them all important two points!

Player-coach Callum Bowley was pleased with the result of the game commenting:

“I was really pleased with the performance from the lads. I thought the work ethic, commitment and desire to win was there from the start and we simplified what we did on the puck. Every line transitioned up ice much quicker than we did last week and we managed the puck quite well. The only disappointing point was to concede three late goals in the game on the penalty kill, but I can’t complain too much as I liked the fact that guys stuck up for themselves late in the game.”