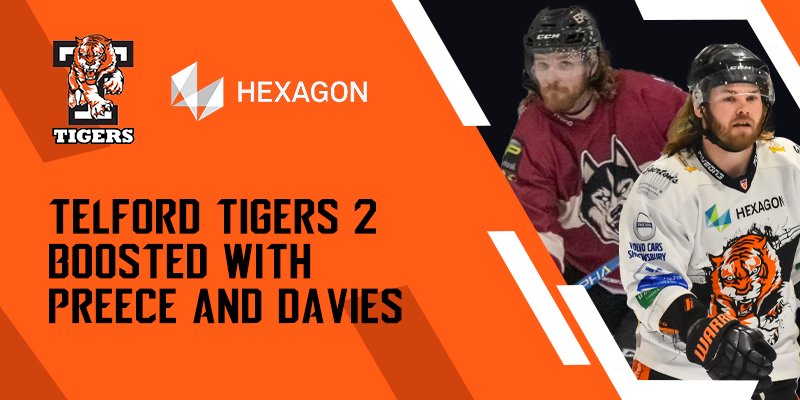 The duo look to boost the Laidler side after a turbulent start to the season has seen many players recovering from injury and unavailable due to work commitments. Telford Tigers 2 coach Scott McKenzie is pleased to have secured both Liam and Paul for the upcoming season and looks to move on and to focus on the season ahead.

“It’s great to have Liam returning and Paul joining us for the remainder of the season.

Liam and I have had conversations for most of the summer so for him to decide that he is ready to commit to us is great news and we welcome him back with open arms.

Paul is a player that I’ve played against many times. A true competitor that works his socks off every shift. He is going to add a good amount of depth to our lineup which is much needed.”

We haven’t played many games so far this season but it’s clear to see that with injuries, work commitments and other factors, we needed to add to our group. These two players certainly add some quality to our lineup and we are glad to be able to have them join us moving forward.

Liam Preece re-joins the Laidler side after departing the club at the end of last season due to personal circumstances. Preece, who was part of the Laidler League winning side last season, will be heading into his fifth consecutive season with the Tigers 2.

The club is delighted to have Preece returning this season and would like to thank Liam’s personal sponsor Retinoblastoma Awareness UK for sponsoring Liam for the season. Liam will once again wear the #75 shirt.

Preece commented on his return to Telford saying;

“Unfortunately, at the end of last season I had to take a step back from playing hockey to concentrate on some personal issues, injuries and priorities I had going on in life. With this, I was unable to give Scott my full commitment back in May, when he first asked me back to play for this season.

I’m now in a position that I feel I can be 100% committed, and fortunately for me Scott has welcomed me back. As always, I’m looking forward to playing again, and I appreciate all the support I’ve had over the summer.”

Paul Davies joins Telford Tigers after returning to NIHL hockey after four years. Despite the hockey career gap, Davies’ is no stranger to the ice with his most recent hockey movements seeing him play for local recreational side Shropshire Huskies. Davies will play in the NIHL Laidler league as part of the Telford Tigers 2 side, a league which he’s familiar with after icing for Deeside Dragons, Solihull Barons and Telford Titans.

The Club are delighted to have Paul on board for the 2022/23 season wearing the #26 jersey.

“I’m very excited to be joining tigers 2. Having had 4+ years away from league hockey, I am looking forward to the challenge it will bring and I hope I can help boost the squad and improve on last years great achievements.

I am fortunate enough to have played with some of the guys from the team in my time and it’s a good feeling to be playing with that great group of people again.”

Both Liam and Paul’s own and loan shirts are available for £75 each (Home and Away). Please see the Tigers online shop for details.

In the 2022/23 season, the Tigers again offer individual player sponsorship at £400. The package will include a personalised “special” exclusive third jersey with a company name or family name patch, announcements on match nights, a small advert or logo in the match night programme and a signed player photo. The jersey will be worn for cup and play-off games and will not be available as a replica.