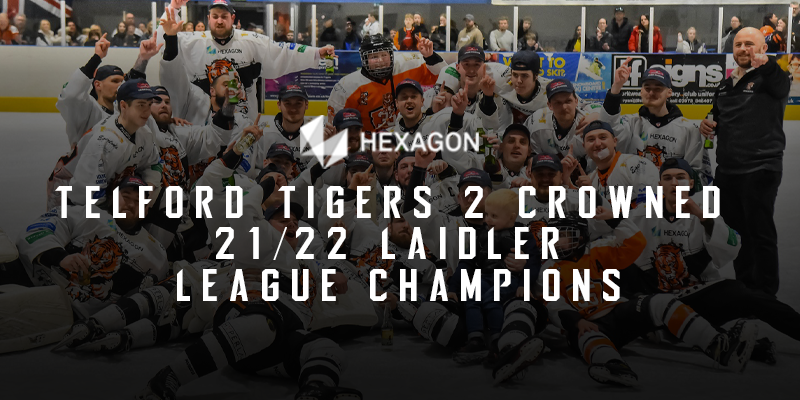 With second-placed Hull Jets trailing Tigers by only two points, it wasn’t just a simple two points Tigers needed in order to clinch the league title. With a further two games in hand, Hull had the opportunity to match Tigers on points in the league table. The ‘winning’ criteria for Tigers to claim the title was a two-goal win on the night.

With nothing to lose, but everything to win, Tigers were hungry for a bittersweet victory after losing to Hull Jets in the Laidler Cup Final back in January. Tigers were on the back foot going into the game having also lost to the Jets last month when the Shropshire side travelled up to Hull, suffering a 4-3 defeat.

As with every meeting between these two teams, the tempo was high and the focus was firm. Puck possession was very much in the Tigers favour for the first period, though the offensive play was evenly matched by the Jets. A powerplay opportunity for Tigers in the final minute of the period opened up the game after Hull’s Ian Kerman landed himself a penalty for boarding. With the puck in the Jets’ zone, Lucas Price sent the perfect pass to Dan Mitchell who one-timed the puck into the top right corner of Smith’s net. The period ended with Tigers one goal up.

The puck dropped for the second period and it was a disorganised start for both teams. Looking for that all-important goal, Tigers were pilling on the pressure. With the puck back in the Jets’ possession after an icing call on Tigers, Lucas Price manages to dig the puck out of the corner up to Crowe who receives on the blue line. Setting up hopeful play, Price picks the puck back up and sweeps the puck across to Oli Hunt who smoothly taps the puck passed the Jets defence and into the net. With the two-goal lead now in the bag, Telford needed to stay composed and maintain the advantage. Anderton was in for a chance, but the Jets’ defence battled for the puck where it’s then frozen by Hull’s netminder Smith. Hunt wins the face-off in the Jets’ zone and the puck is sent between Price and Keyes. The smart and clinical set-up of play led to Oli Hunt finding the unmarked Karol Jets who beat Smith with a low back door shot to his left, taking Tigers three goals up.

Lucas Price went close to extending the Tigers’ lead when he battled for the puck and has a shot on the Jets’ goal but narrowly misses hitting the post.

A blunder in front of the Jets’ crease led to Smith freezing the puck, so it was a break in play and a face-off in their zone to follow. Washburn wins the face-off where Filip Supa then sends the puck around the back of the net for Charlie Webb to pick up. Another hard battle on the puck from Webb allows Supa to regain puck possession who attempts to wrap around the puck into the Jets’ net. Coming off unsuccessfully, the puck ends up in the feet of the fumbling Jets defence where Supa manages to sneak the puck in with another backdoor sweep into the net, taking Tigers to a comfortable four-goal lead.

With only 26 minutes gone on the clock, Jets take their time out. The game restarts and Jets begin to pick up the pace again, a slapshot from Joseph Anson looks dangerous until Tigers’ Brown effortlessly glove saves the puck. The period continued with end to end hockey, but neither side added to the goal tally and the period ended four goals up to the Tigers.

It all came down to the third and final period. Jets continued to hunt down some goals to disrupt Tigers’ momentum.

Tigers managed to keep themselves at full strength for the majority of the game, with only one minor penalty early on in the first period. But the pressure started to pile on and Jets were handed consecutive powerplays for almost 10 minutes, including a five on three powerplay after Crowe and Keyes were given minor penalties for holding and roughing.

Frustratingly, the Jets managed to capitalise and snatched a powerplay goal, squeezing the goal difference with still over 15 minutes to play. The game resets to a centre ice face-off and Tigers struggle to regain consistent possession of the puck, following another icing call on Telford, the face-off returns to their defensive zone. Jets win the puck straight off the face-off and an open back-door gifts Jets’ Ward the opportunity to take to two goals.

Tigers managed to cling onto the two-goal heading into the final two minutes of the game. Kieran Beach for the Jets manages to break away with the puck, with Jasecko chasing behind but nothing comes of it.

Into the last 30 seconds of the game and the crowd is roaring as the clock begins to countdown on what will be Telford Tigers 2’s first-ever league title. Tigers’ Captain Mike Jones makes a body block on a threatening-looking puck, swiftly followed by the Tigers’ net being knocked off the posts by Mitchell.

With only 19 seconds left on the clock, Jets’ were awarded a penalty shot… Kieran Beach steps up to take the penalty. Beach approaches Brown in the net but overhandles the puck which allowed Brown to poke away the puck with his stick, the penalty was saved. With 19 seconds still remaining on the clock, Jets pull their netminder and put a sixth man on the ice. Tigers win the final drawn in their zone and the puck bobbles around before Washburn tapped the puck away from the front of the Tigers goal and cleared it down the ice into the Hull end. The bench and the crowd are screaming with one second to go and then the final buzzer sounds!

Telford Tigers 2 take the 2021/22 League Title and the Club’s first piece of silverware for the season.

Man of the match: Zack Brown

After the game Tigers 2 Head Coach Scott McKenzie commented; “Firstly, I’d like to congratulate Hull Jets on a terrific season. Beating us in the cup final and narrowly missing out on the league by one goal just shows how close this run in has actually been. What can I say about our group? Unbelievable spirit, character, commitment and tenacity. To come back from the cup defeat and finish the league campaign unbeaten is just incredible.

We put together a plan at the start of the season to just being competitive with the aim to win the league. That is always our goal but until you reach it, it never actually seems possible. You would think that the league winning feeling would be excitement and joy but it’s an overwhelming feeling of relief.

I have limited time to implement what I want the players to do but it has felt like during the last 4-6 weeks of games and practice, something just clicked. The guys found a new gear and identified what it took to win. Together with a great bench coach in Doug Wildman, manager in Kieran Nickless and in owner in Mike Washburn, the lads have been given the platform to be successful. Ultimately though, the credit has to go to the players. Once that gate opens and they go onto the ice, they have control of the outcome and they deserve all the plaudits.

I’m extremely happy and proud of everyone involved in the Telford Tigers, both at NIHL National & NIHL Laidler level. You deserve this success and oh by the way, let’s win the playoffs!!!”

“Having the season finish and league position all hinge on our final game was exciting to say the least. We had met Hull already a few times and losing the cup final to them was still very sore so we needed some revenge and it all came down to this game.

Coach Scott had planned how we proposed to play and the lads executed that perfectly. We had comfortable control of the game and a 4 goal lead but a 5-minute spell of the game where we lost some of our disciplines gave Hull a glimmer of hope and they grabbed a couple of goals back. But as we’ve shown all season we have great depth in the squad and everyone played their part and dug deep to get the win.

A fantastic moment for everyone involved with the team but also for the whole Club as the national team are now only a few points away from also winning their respective league. I don’t think it’s been done before where two teams from the same Club at NIHL level have both won the league titles so a huge achievement in itself. We now look forward and plan for the upcoming playoffs with a few needed weeks off to rest and regroup to start the charge.

We want to thank our supporters who have been excellent all season and everyone who believed in us.”

If you want to pick up a LAIDLER CHAMPIONS game worn jersey, there’s still an opportunity to do so! Limited availability remaining! Purchase your game worn own and loan jersey here!