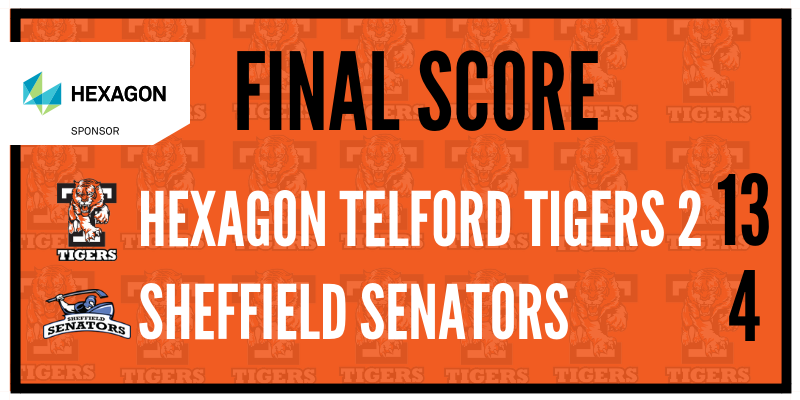 This weekend saw the Hexagon Telford Tigers 2 compete in a two game weekend, eager for them 4 points!

After taking the win on Saturday in Blackburn, the Tigers 2 boys were warmed up and ready for the second battle of the weekend on Sunday against Sheffield Senators on home ice. After suffering a 5-2 defeat in November against the Sheffield side, the Tigers knew they were in for a good game!

The puck dropped for the first period and the Tigers quickly dominated the game as Washburn picked up the puck centre ice followed by laying the perfect pass before Hammerton clinically finished it off with a quality redirect shot into the right top corner of the net only 1 minute and 56 seconds into the game.

And that wasn’t the only goal from Hammerton… Before the period ended, Charlie managed to complete his hat trick of goals assisted by Bowley and Plandor! There was plenty of action throughout the first period, a injury for Senators Captain Sean Wild resulted in the period break being brought forward as he was attended to. The period resumed, and another goal from #27 Griffin sealed a 4 goal lead for the Tigers by the end of the first period.

Period 2 also wasn’t a quiet period for either team. It was a gutsy performance from Senators but by the half way point of the game, Tigers 2 were 6 goals up with goals from Plandor and Bowley. Tigers added to the goals with another one from Hammerton at 32:34 assisted by again Washburn and Harrison. Senators managed to respond with their first goal of the game at 36:09 from Nixon. The period ended well in the Tigers favour with 7 goals to 1.

The third and final period was underway, and with Ollie Johnson then in the nets for Tigers, they were quick to capitalise the play with a delayed penalty goal from #59 Jordan Jolly, assisted by #6 Reed. This was followed by a goal from #18 Hustwick at 44:48. Despite the score line, Sheffield started to pick up the pace and found 2 goals within 20 seconds of one another, the first at 45:15. A tripping penalty for Senators’ Weeks allowed Hammerton to stoke again with his fifth goal of the goal at 47:06!

And that wasn’t the last of the goals… with another powerplay goal from Jolly and a debut goal for #23 James Callagher, it was #77 Thomason who brought the game to a close at 58:26 with the final goal of the game for Tigers.

The final buzzer for the game went and it was a solid win for Tigers 2. Both teams had a gusty performance throughout, but it was the hosts who came out on top. Player coach Callum Bowley was ecstatic with the team’s performance commenting:

“The performance against Senators has to be one of our best this season. I thought everyone really stepped it up and worked hard. We spoke about cutting out simple mistakes and playing with tempo, and it’s amazing what it does. Every line contributed and got on the board, which is exactly what we need. We have to play at that level week in week out.”

Hexagon Telford Tigers 2 continue their league campaign on Sunday 16th December where they will be hosts to Blackburn Hawks 2.

Everyone at Telford Tigers would also like to send their very best wishes to Shaun Wild who unfortunately sustained some serious injuries during the game. We hope Shaun has a very smooth and speedy recovery!