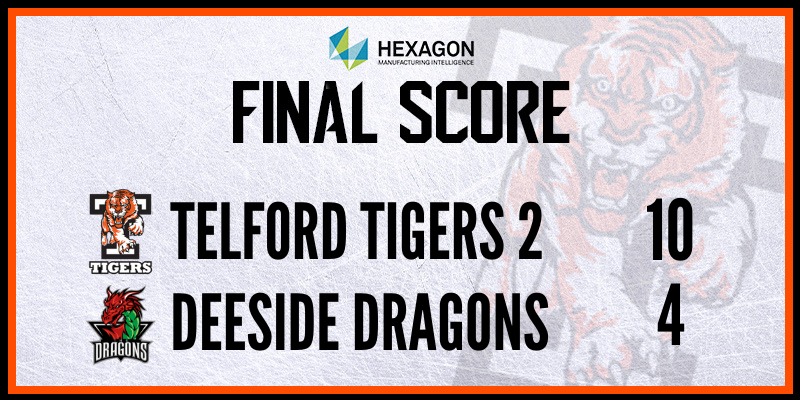 Hexagon Telford Tigers 2 welcomed local rivals Deeside Dragons to Telford Ice Rink on Saturday evening for what was expected to be a very interesting game to say the least. Back in September, when Telford were the visitors in Deeside, an altercation during the game led to Tigers’ Connor Keyes and Dragons’ Alex Parry receiving hefty bans by the league.

Whilst Keyes is still out until December 1st with his ten-game ban, Deeside’s Parry was eligible to play in Saturday’s clash after serving his suspension for four-games; despite Parry being eligible to play, he did not travel with the team to ice. Tigers fans were pleased to see the return of Karol Jets once again who has slowly but surely been working towards getting match fit again following his injury, which cut his season short last September.

Ryan Lewis started in nets for Tigers, whilst Samantha Bolwell was in for the Dragons until the final ten minutes of the game where Michael Rogers took to the crease.

The puck dropped for the first and Tigers quickly found their feet, taking control of the game. Within the first five minutes of the game, Tigers’ import Filip Supa found the back of the Dragons net, which set the pace for the rest of the period. Within a minute of the first goal, the Dragons found themselves with four men on the ice after Karl Bacon was given a two-minute minor penalty for cross checking; Tigers failed to capitalise on the first powerplay of the game.

Fear not, Tigers were still on top of the game and in the twelfth minute, Brandon Anderton added to the scoreboard, with an assist from Supa. The duo struck again minutes later, with a third goal from Supa, assisted by Anderton and Andrews. The Dragons were certain to respond in the first period, and they did with a short-handed goal in the eighteenth minute of the game. Before the period could end, Dragons’ Furnival went in at Andrews with his knees at some force, taking Andrews out. Furnival was ejected from the game with a match penalty, followed by the Dragons bench receiving a two-minute penalty for unsportsmanlike conduct. The first period ended three goals to one in the Tigers favour.

The puck dropped for the second period, and once again Telford Tigers started things the right way with their fourth goal less than a minute into the period from Hustwick, assisted by Anderton and Washburn. This was shortly followed by Supa’s hattrick; a powerplay goal assisted by Reed and Bartholomew. With only five minutes to go until the half point of the game; Dragons’ Bolwell conceded their sixth goal of the game; scored by Jolly.

For the rest of the period, the Tigers goals started to slow down, but the Dragons started to ramp it up. Two goal within two minutes of each other saw the Dragons put three goals onto the score board for the visitors, which included a hattrick goal for James Parsons. The period ended once again in the Tigers favour, six goals to three.

The third and final period was a similar start to the previous two, Tigers bagged another early period goal. Within thirty seconds of the puck dropping, it was Tigers’ defenceman, Simon Harrison who shot between the pipes making it seven goals for Tigers. Once again, this didn’t dampen down the Dragons who fought back with their fourth goal at 43:15 however, it wasn’t enough to win back the game.

Dragons’ battled through the remainder of the game despite losing Karl Bacon with a 2+10-minute penalty for a check to the head. Telford Tigers sealed the win with their further three goals before the end of the game, taking the hosts to a six-goal lead to finish.

The well-travelled Deeside fans cheered their team on as their team made their way off the ice and their Captain James Parsons was awarded with man of the match. A tough game all round in which the Tigers finally came out on top!

Man of the match: Ben Washburn

The win against Deeside was very satisfying in many ways. Not only was it a long overdue, positive result; but we finally settled into playing as a team as we know we can.

We started the game as we pretty much planned at a very high tempo and took the game to Deeside, not giving them time to settle on the puck. We lost our concentration for a small five-minute spell in the second period, giving away a few penalties which led to us conceding; allowing Deeside a chance to get back into the game. We came out on top, dominating the final period, running out comfortable winners by ten goals.

We’re very pleased with how the team performed and how all the lines worked and we look forward to playing away at Widnes next week where we will continue to build on this weekend’s result.”