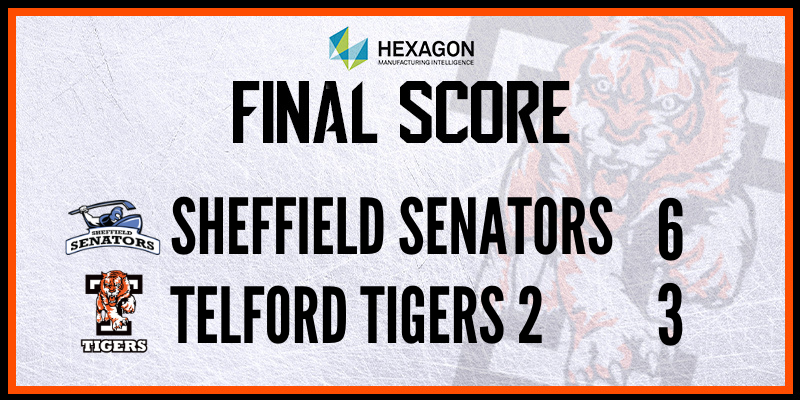 Hexagon Telford Tigers 2 took a trip to South Yorkshire on Saturday night to take on the Sheffield Senators in another NIHL North 2 Laidler clash.

Oli Johnson started in goal for the Tigers and in the nets for Senators was Tigers 2 old-timer, Zack Brown. Tigers were given an early lead with import Filip Supa scoring the first goal of the game within the first two minutes of the puck dropping. This was then shortly followed by Filip Supa who glided his way through the Senators players before slipping the puck in the back of Brown’s net, short-handed within a couple of minutes of the first goal.

Tigers 2 started to get comfortable with their two-goal lead and pressed on with the remainder of the first period looking for a third goal. It was the Sens who bagged the third goal of the game after capitalising on a powerplay; subsequently after Tigers’ Gordon was penalised for interference.  Undesirably, the hosts managed to sneak in another goal before the buzzer, drawing an equalising line under the first period for both teams.

The puck dropped for the second period and again, it was Tigers 2 who took the lead in the period with the visitor’s third goal at 25:15 from Jordan Jolly. The continuing lead for Tigers 2 was hastily denied when the hosts found another equaliser five minutes’ shy of end of the period. Just to add to the frustration, the Sens went on to add another goal to the scoreboard before the end of the second. The period ended in the Senators’ favour, four goals to three.

The third and final period was all to play for, with a lead to continue for Senators and a couple of goals to find for Tigers. Despite more shots on goal in the period for the Tigers than the visitors, they tussled to succeed with getting the puck into the Senators net, but Brown did nothing but deny them. Senators scored their fourth at 43:17, an even-handed goal which made the Tigers chances of a comeback starting to look slim. Much to the Tigers’ despair, the hosts managed to seal another goal at 51:57.

With no powerplay opportunities until the last five minutes of the game, Tigers had no other chances to advance on the Senators on a powerplay, inevitably Tigers didn’t succeed with any further goals. The buzzer sounded for the final time that evening, and a disappointed Tigers side began the line of handshakes. Despite the frustrating scoreline – Tigers old-timer still managed to hold everyone up with a quick catch up with each of his old team mates before the man of the match presentations.